The Truth Matters Only if You Value it

Clearly I am not objective.  I love Israel and hate Hamas.  I believe Hamas is to blame for the deaths of not only Israelis but Palestinians as well.  I believe Benjamin Netanyahu is a great man and Khaleed Meshaal is an evil man.  I agree with Netanyahu when he says, “If the Arabs put down their weapons there would be no more war.  If Israel put down her weapons, there would be no more Israel.”  Clearly I am not objective.

I make no claims to be objective.  However, despite my lack of objectivity I do seek the truth.  So much so that I acknowledge that Israel has made mistakes and done some things they should not have done over the past 66 years.  But there is no truth that justifies the attacks Israel has had to endure, be they violent attacks from terrorists or verbal attacks from anti-Semites.  If presented with factual evidence of a certain truth, even one that opposes my views, I would address it honestly and make every attempt to be fair in my assessment.  The question is, why won’t my enemies do the same?

It’s because the truth has no meaning to them.  Most anti-Israel and anti-Semitic sentiment is not based in truth.  It’s either based in ideology or communal involvement.  People like to be part of something.  Even something motivated by hate.  The ideology however is what drives everything.  It drives terrorism, stirs up the masses, allows the leaders to make statements they know are not true, but justify with their beliefs.  A friend once said to me, “people buy with emotion and justify it with logic.”  Once the masses buy the bill of goods sold to them by the mini-dictators popping up all over the world, they search for the logic to back it up.  For example, the number one lie being told is that Israel is committing genocide.  Once that message is sold to the Muslim masses by the Imans, all they need now is a complicit al-Jazeera or CNN to show a man holding an injured or dead child in his hand in Gaza and the people have their “logic” to back up the sale.

Here’s the problem with that.  When you use that method the truth is irrelevant.  The only thing that matters is pushing your agenda.  Even visual evidence won’t matter anymore.  You passionately sell an ideal, even one of hate, show one image, maybe only make one ridiculous claim that can be used to back it up, and its sold.  Russell Brand goes on a hateful diatribe against Israel on his online channel he calls the Trews, claiming it is True News, and people who like the movie star buy into it, even though he sits there and blatantly obstructs the truth from his listeners.  Hamas sells the idea that Israel is indiscriminately bombing Gaza, targeting women and children, and those who have already bought into anti-Zionism and Jew hatred see a blown up building and they’ve seen enough.  We could have a 10 page document and 100 pictures proving that Hamas put those innocents in harms way by using them as human shields and it would make no difference.  They’ve already decided what they want to believe.  The truth doesn’t matter anymore.

Do we combat this with lies of our own?  I say no.  But I do think we need to be a little less concerned about whether or not we are unfair to those allowing those lies to be spoken and should be spending less time defending those who only express an (anti-Semitic) opinion.  Tolerance is a very charitable trait, particularly in war time, and as we all know charity starts at home.

As I responded in social media when someone criticized my letter to George Clooney, “Never Again” does not mean Never Again unless we insult George Clooney.  Never Again means recognizing the signs and doing all we can to prevent it.  I believe the truth is always the right way, but being tolerant at our own expense is not. 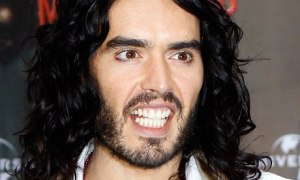 Before writing you this letter I did a little research on you. Although no one, including myself ever thought you had it all together, I never realized how messed up you truly are.  ADHD, bi-polar, substance abuse, and bulimia?  Your accomplishments are astounding.  I guess that is what qualifies you as an expert in Middle Eastern affairs.

I’ve listened to your delusional rants and since you won’t stop talking I finally felt compelled to address you.  I guess when your biggest problem in life is should I fall off the wagon this week or next week and what movie should I suck in next, it is hard to relate to what is it like to live under the constant threat of terror attacks and missiles.  I normally make an argument in favor of my position when writing one of these letters, but for the most part I will make an exception in your case.  The reason being is that I am on to you.  This isn’t about your concern for the people of Gaza.  Those who care about the people of Gaza focus on their plight rather than regurgitate the usual nonsensical anti-Israel propaganda they picked up in Hamas for Dummies.  As you can see, despite the fact that I am Jewish and a Zionist, I am not actually heartless.  I don’t attack those who legitimately care about the safety of innocent people.  But that’s not you. What this is about Russ, may I call you Russ? No? Good.  What this is about Russ is your need for attention and purpose in life.  You sit and ramble from some dumb couch all cozy and comfortable, speaking about matters that are life and death for the people you speak about, but all you are really doing is looking for a way for an addict to feel important and some satirical way for you to promote yourself and some stupid home based show you think matters to people.  You appeal to idiots, because quite frankly you are one.

You are also a coward.  I say that because if you were so concerned about human rights violations and had any integrity at all you’d be going after ISIS, not Israel.  But you know, as do so many other cowards like yourself, that the worst you have to face when going after Israel and the Jews are economic consequences and letters like this.  If you went after Hamas or ISIS you might actually get hurt, and then you wouldn’t be able to sit on your couch chuckling like a manic moron waiting for the pills to take effect.

Russ, I’m the son of Holocaust survivors.  That means my parents were not among the 6 million Jews murdered by the Nazis, but that they did live through that horrific time.  I know people such as yourself tend to shake their heads when we bring that up, saying things like, “there goes a Jew whining about the Holocaust again”, but I genuinely don’t care if you like it or not.  What I do care about is the approach you take that if successful would contribute to the possibility of another Holocaust.  Of course you don’t see that because frankly, you don’t want to.  If your attempt at intelligent and original thought went beyond some big words most of your followers don’t even understand, you might see the Trewth, and then the Trews might have some credibility.  Now all you are doing is establishing another anti-Israel and anti-Semitic platform with no basis in fact and honesty.

I don’t usually say this to an addict, but I think you need to go full throttle back into the drugs and alcohol man. Chances are you’d do a lot less harm than you are now.  You’d like it more too.  After all, if you don’t know what you’re talking about anyway, you might as well do it under the influence.