Yell at the enemy, not each other 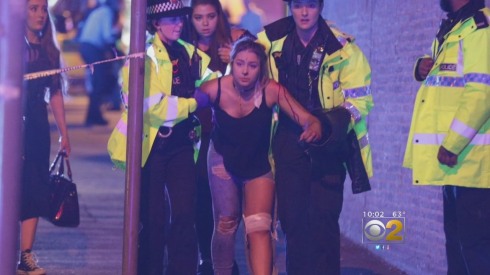 When I heard about the Manchester terror attack, one of the things that went through my mind was that it was the first time since my mother passed away on April 19th that I actually felt ironically and sadly happy she wasn’t alive to see it. It would have broken her heart.  As it did for everyone decent with a heart. There are many people with many different political ideologies and strategies on how to handle terrorism, but the one thing I can say for sure is that the majority of them were devastated by what happened and despite the likelihood that it will be repeated in some manner,  hope and pray something like this never happens again.

But apparently that is not good enough for some people. There are many who feel if your solution isn’t their solution you are now part of the problem.  As is so often the case, it is easier to go after the people who would never hurt you than it is to go after the ones that would be happy to hurt you. Calling a liberal a name for not being what you see as tough enough or calling a Conservative a fascist for what you may consider an extreme position against terrorism certainly is a lot easier than  screaming and shouting at the real bad guys.  I am an open critic of President Donald Trump, but one thing I won’t criticize him for is calling ISIS a bunch of losers.  Is the language “presidential”? Maybe not. But first of all it is true, and second of all it is a lot better than coming out and ranting and raving about how this is the fault of liberals.  So in this instance I not only support him and commend him, I urge people to follow his example.

You may think someone is misguided for their approach, but should you be yelling and screaming at the person who bemoans that they want to see peace between all people and all faiths? Should you put down the more militant type that is so mad at the brutality and evil taking place that they want blood?  The answer to both questions is no, you should not.  It is possible that one side is very right and the other very wrong or that the answer lies somewhere in the middle, but one thing is certain.  Neither of these people from either side are the real enemy and to lose sight of this does more to help the terrorists than it does to hurt them.  Debate the other from whatever side you sit on, but do not lose sight of the fact that most people, even those on an opposing side from yours want exactly the same thing.  A peaceful and secure life.

When we fight each other we give the true enemy a significant victory, something mostly everyone who will read this, be they to the far left or far right does not want to happen. Remember that and who knows?  Maybe we’ll get a lot closer to finding a real solution rather than just shout at each other trying to prove how smart we are.

A brief introduction for those who don’t read Dutch and don’t know the backstory. During the war, when my father moved my mother from hiding place to hiding place in order to keep her safe, it was not till she reached the home of Lubertus & Geeske te Kiefte that she was somewhere she would be safe and fed till the end of the war. The te Kiefte’s saved my mother at tremendous personal risk and had it not been for them it’s very possible she would not have survived the war. The 4 of them, my parents and the te Keiftes, not only kept in touch after the war, they became close to the point of being family. The picture attached to this post is that of their only surviving daughter Nina sitting with my mother in Florida this past March, and the attached writing in Dutch is the article submitted by Nina and her husband Harm in loving memory of the woman they called Tante(Aunt) Sip to Lemerlerveld’s media outlet the Lemerlervelder.  With the help of an online translation and a little bit of cleaning up on my part you can read the article in English.  You can also click the link and see how the article appears in the newspaper.  My warmest thanks to Harm for his efforts in getting this done. It is visual evidence of the miracle that was Lemerlerveld and the te Kieftes.

On the 10th of  April it is 72 years ago that Lemelerveld was liberated by the Canadian Army. During the war Lemelerveld was a welcoming village for many people who were persecuted by the Nazis or for those with a shortage of food the long journey toward the east.

Sipora Groen – Rodrigues Lopes came as a young Jewish woman of 22 through her many wanderings to Lubertus and Geeske te Kiefte at the Kerkstraat, where she used the pseudonym “Tini” for the almost one and a half years that the family took her in.
In these war years she learned to know her future husband Nardus Groen (Alias Jan Henraat) which together with Bertus te Kiefte was closely linked with the local resistance in Lemelerveld.

On 19 April, Sipora Groen at the age 95, died after a short illness in Florida.
Until shortly before her death she was still active in life and shared her story through lectures in American schools and drove her car daily on the busy highways.
The friendship between the Groens and the Kieftes continued after the war and will always remain as the families have regularly visited each other over and over again.
During the last visit in March this year Sipora said again how she was impressed by the hospitality of the Lemelerveldse population in hiding her. “Lemelerveld was the best” she repeated a few times. “Everyone was good, with one exception. But he was warned! If he would open his mouth he would be finished and he took it to heart.”

“Lemelerveld was the best”
photo taken by: Harm Kuijper

in 2012 has David Groen, the youngest son of Sipora, wrote a book about the adventures of his parents during the war called “Jew Face” (Jodenkop) also has much to read about Lemelerveld.