Why it’s Too Late to Stop Terror 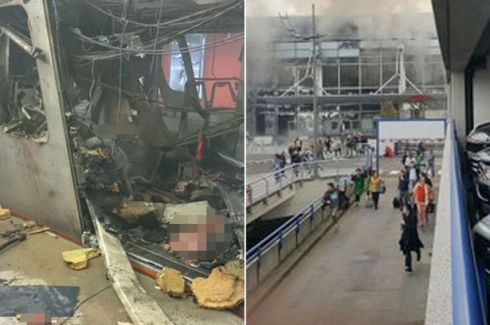 It’s somewhat encouraging to see the victories taking place against ISIS in Syria and Iraq.  Taking out their second in command and capturing the town of Palmyra are both significant accomplishments in the war on the territorial front. That part of the war can be won in somewhat conventional fashion.  The only question is what the best course of action is to win it.  Even the lesser military minds can see an end game.  The main questions are what strategy to use and how long it will take?  With the ongoing terrorist attacks in the west, operations have increased and have so far proven to be relatively successful.  The second war, the terror war being brought to Europe and as of yet on a lesser scale to North America is not a war that can be won any time soon, if at all.  The sad news is, it’s just too late.

It’s a harsh reality, one that may or may not ever impact people directly, but it’s a reality nonetheless.   Even if somehow ISIS would be wiped out in its various bases of operations, the exported terrorists, sitting and waiting for the best opportunities to strike are so spread out and in such large number, even if we were to just wait it out, be vigilant, and stop numerous attacks, there will are still likely to be numerous attacks that will be successful and wreak maximum havoc and suffering.  Just look at Israel, a nation dealing with terror for decades and arguably the most prepared and most adept at dealing with terrorism.  Yet despite the expertise there are still numerous terrorist attacks resulting in the deaths of innocent men, women and children.

There might have been an opportunity a few years back to stop the growth of ISIS, but the sad fact is that until terror hits home, or close to home, western nations are far more accomplished in rationalization than in positive results.  Terrorist activities against Israeli citizens have been rationalized as a fight for liberation.  Attacks against Israelis, Iraqis, Libyans, Pakistanis, just to name a few, are not viewed by the west with the same anger and horror as attacks against the French, Belgian or American. Even today, after 63 people, most of them women and children were killed in a terrorist attack in Lahore, Pakistan, CNN and FOX are providing minimal coverage and discussion.  In fact, a half day later, the terror attack isn’t even the top story.  That’s been changed to a story of how Donald Trump claims to be better for women than anyone and is accompanied by a picture of him kissing his wife Melania. Incidentally, the victims in Pakistan were Christians attacked by a splinter group of the Taliban and purposely done on Easter Sunday.  Iran, a nation with far greater experience and success in the development and exportation of terrorists is allowed to make a deal for nuclear energy and is somehow rewarded with the release of billions of dollars.  Even if somehow we do outlast what we say are hundreds but are more likely thousands of ISIS operatives ready to strike, if the entire approach towards terror doesn’t change, if we do defeat ISIS, we are likely to be left with another group, or even worse, country to fight.  For people who take the view that they can’t be worried about what happens to the “people over there”, they need to understand that it is the sons and brothers of those people the terrorists are radicalizing and mobilizing  against the west.

As is the case with many of my fellow Jews and many pro-Israel citizens in the west, I have argued for years that there is not enough value put on Jewish life.  I still maintain that, but the difference now is that I believe there is not enough value put on any life lost east of Germany.  I am not making a bleeding heart plea for sympathy, rather a legitimate call to arms against global terrorism, not just the flavor of the moment.  ISIS is by far the most active and dangerous organization in the world, but it is joined by so many other groups ready to take over prominence if they get defeated that without a long term global strategy against terror, we are doomed to live with it for the rest of our lives and very likely see it continue for further generations.

If the World was Right

But the world isn’t right; it’s very wrong.  It is filled with evil and hypocrisy and those who choose to remain silent.  Those who speak out against Israel’s fight for security but remain silent today carry some of the burden of responsibility for what took place today in Pakistan.  So Roger Waters, Amal Clooney, Bryan Adams, Russell Brand, Penelope Cruz and Rosie O’Donnell, if you have nothing to say now you show once again how you are NOT only not part of the solution, you are part of the problem.

Your hypocrisy is contributing to humanity’s downfall.  Where are you now?

It’s the topic we don’t often bring up, but it’s always somewhere in our minds.  With all that is happening in the world one might think it is just a matter of time till we see the use of some form of a nuclear weapon.  It’s a terrifying thought and quite frankly one that makes no normal person happy, regardless of where it would be used.  We can choose to ignore the subject, a decision I would understand because of how frightening it is to imagine, but what I am going to do in this piece is break down the numerous scenarios in which it could happen.

I’ll start with the 5 countries that are members of the Non-Proliferation Treaty. They are the United States, Russia, United Kingdom, France and China.  I believe the least likely of the  to be presented with an option in which to go nuclear is China.  Of the remaining 4, only Russia finds itself in a conflict close to home, but the fact that it is so close to home is the very reason not to use it.  The concerning thing about Russia has always been that after the break up of the Soviet Union there was a concern that weapons were scattered in various locations. That fear has dissipated somewhat with the control Vladimir Putin seems to have over the area, but that being said, Russia is the country on the list I see as most susceptible to terrorist infiltration.  The remaining three are all facing the potential threats of terrorist attacks by Islamic terrorists and should an attack be serious enough and the source identifiable, one can’t take a nuclear response off the table.  That is something all would be reluctant to do unless the attack on them was nuclear, and even then it would be uncertain.

There are four other countries that are nuclear powers, three declared and not members of the Non-Proliferation Treaty, and one which is not a declared nuclear power but widely known as being one. There are more scenarios here and they are all quite terrifying. The first two, India and Pakistan, are the ones that might be seen as most likely to use  a nuclear weapon on the other.  Although the tensions between the two have calmed somewhat over the years, these 2 countries still don’t like each other and have very different global interests.  I believe India would only consider doing so if forced into it  and I believe Pakistan under its current leadership would not use it.  But this is where it gets interesting.  The Taliban has a significant presence in Pakistan and with neighboring Afghanistan still unstable and dealing with its strong Taliban force, no one wants to even think about what would happen should Pakistan’s government be replaced with a government aligned with Islamic extremists, or even worse a Taliban government.  That would without doubt be a global game changer.

There are 2 countries left to speak of, one of which is the one undeclared nuclear power, Israel.  Israel, like the nations in the Non-Proliferation Treaty, will only go nuclear if absolutely necessary, meaning if it is a matter of survival.  Israel would not need nuclear weapons to wipe out Iran’s nuclear program and is more likely to keep Iran in check with the threat of reprisal should Iran get nuclear weapons and use one of its proxies to attack Israel.

I left North Korea for last.  This was not an accident.  It is unquestionably the most dangerous of all the nuclear powers.  Besides the fact that their dictator Kim Jong has repeatedly threatened the U.S., it’s believed that North Korea helped fund the building of Hamas’s terror tunnels from Gaza to Israel.  No one finds it hard to believe that Kim would have a problem providing Hamas or any other terrorist organization with a nuclear weapon.  Like Hamas, Kim Jong’s Korea doesn’t care about his own people so he would have no problem contributing to a genocide of another people.  I have no doubt Israel is watching him very closely.

The terrorism scenario is always out there of course, be it a conventional bomb or dirty bomb,  especially since there are groups that have declared their willingness and desire to cause devastation in large western cities, most notably New York City.

All this is conjecture, but with all the conflicts going on today anything can happen at any time.  Let’s hope this doesn’t.

For all those who need hope…

To all those in Israel, Holland, England, Australia, Germany, France, India, Pakistan, Singapore,  Sweden, Philipines,  Spain, Poland, and of course the United States of America who are viewing my blog, THANK YOU!

Now tell all your friends and tell them to tell all of theirs.  Let them know about the book Jew Face.  I look around and see many people today who have lost hope because of everyday difficulties and struggles and hope that knowing this story will help in some way.  Everyone needs inspiration and those who have read the book so far have at the very least seen how people can come from the worst situation, the brink of personal devastation, and built a life of joy, fulfillment, and love.

So tell your friends.  Let them have the opportunity to decide if they want to reap the benefits of this story.