In Defense of Nicki Minaj 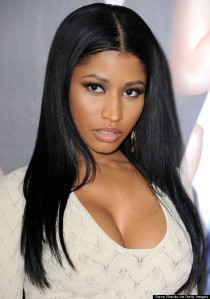 As everyone knows, I have no problem going after anti-Semites.  I am also not an apologist.  Bryan Adams sang my favorite song of all time and I went after him. George Clooney has been an actor whose work I’ve enjoyed and I’ve gone after him twice for showing no signs he disagrees with his anti-Zionist/Anti-Semitic wife.  I used to think Penelope Cruz was beautiful and now I can’t even look at her.  If I am convinced someone is against the Jewish people, I want no part of them and I am not shy about saying so.  That is why it may come of some surprise to those reading this that I am choosing to defend Nicki Minaj.

There are two reasons I’m defending her.  First of all, personally, I just didn’t see it when I watched the video, which I did from start to finish.  I am the son of Holocaust survivors.  I wrote a book about what my parents went through during the Nazi occupation of Holland.  I am proudly sensitive to anti-Jewish and anti-Israel sentiment.  I personally did not see the connection to Nazi symbolism in the video other than to the extent I was looking for it due to the reactions it garnered.  That doesn’t mean I think it’s a good video nor do I think the feelings of those it offended should be ignored, especially since many of those it offended are people just like me, proud Jews.  All it means is that in the name of honesty I can’t sit here and pretend to be offended by something that personally did not offend me. Incidentally, this is why I remained silent on the subject yesterday.  That and one other very important reason.  I wanted to see how Nicki Minaj would react to the criticism.  Which brings me to the second reason I am defending her.

Yesterday I wrote an Open Letter to Peter Gabriel.  In this letter I made the following point in regard to what motivates me to write these Open Letters.

“My philosophy, when it comes to writing one of these letters, and you can look it up and verify it if you wish, is that I write them primarily based on the words one utters.  In some instances I will address someone’s silence, but that is only when that silence indeed speaks volumes.  When someone expresses an opinion to me that someone is on what I consider to be the wrong side of the fence, I look for evidence to back it up.  Nothing provides better evidence than the words one speaks.”

Minaj made the following comments on Twitter regarding the controversy caused by the video.

“I didn’t come up w/the concept, but I’m very sorry & take full responsibility if it has offended anyone.  Both the producer, & person in charge of over seeing the lyric video (one of my best friends & videographer: A. Loucas), happen to be Jewish.  I’d never condone Nazism in my art.”

Although after watching the video I might disagree with Nicki Minaj on what is called art, she makes it very clear in her words that offending Jews and glorifying Nazism was not the desired effect of the video.  I for one believe her.

Many months ago in one of my posts I made the statement that there are enough outspoken and proud anti-Semites that we really don’t need to be spending our time going after someone who openly says they are not anti-Semitic.  In my opinion this is a prime example of what I was eluding to when I made that point.

One last thing.  I never have and never will be one of those people who believe it is a problem if you offend everyone else except for the Jewish people.  With that in mind, despite my defense of Minaj and the fact that I personally was not offended, if she does want to show that “full responsibility” she was referring to and achieve what I think should be seen as a slam dunk in the Jewish community, pull the video.  Show the respect evident in your words, acknowledge the sensibilities of the Jewish community and make a statement of great significance, for it offended enough people to be a problem.  Pull the video and leave little doubt as to your true intentions.