UN calls on the Maccabees to avoid hostilities

In response to the recent increase of hostilities between King Antiochus’ Seleucids and the Jewish population led by Judah Maccabee, United Nations Secretary General Ban Ki-moon released the following statement:

“We call on the Jewish population to immediately stop its attacks against the Seleucid government in Jerusalem.  We intend to form a committee to investigate the alleged banning of circumcision imposed by the Seleucids as well as the Maccabean claim of inappropriate actions within the Temple, but maintain in theory that the government is within its rights to impose a ban of this nature in order to protect religious sovereignty.  Despite the claims by Maccabean leadership claiming the installation of idolatrous figures being placed in the Holy Temple, it is the belief of this organization that this is a tremendous opportunity for the coexistence of all religions within Jerusalem’s holiest places.  What will be critical in making this work will be Jewish cooperation and subjugation to King Antiochus and his leadership of Jerusalem and outlying areas.  Any resistance by Judah and his fellow Maccabees will be seen as hostility bordering on criminal activity.  We have already begun the groundwork for further investigations of Judah Maccabee for war crimes that may have already taken place and in anticipation and expectation of further actions.”

U.S. President Barack Obama commented on the increasing tension in the area as well.

“We call on both parties to show restraint”, said President Obama.  “I have spoken directly to Judah Maccabee and I am confident that he is aware of my continuing support and commitment to the safety and well-being of his people.  That being said, I have emphasized in our discussions my belief in a peaceful solution.  King Antiochus has assured me  that his intentions are peaceful and I believe him to be sincere.”

Judah Maccabee issued the following statement in response to the comments:

“My number one responsibility is to my people.  We do not answer to the United Nations or to any world leader.  One day we will look back at this moment and realize that we were at a crossroads.  Our choices in leadership will determine whether or not we survive as a people and will celebrate our existence,  or succumb to the pressure and lament our losses. It is my intention to see to it that rather than allowing an enemy to drive us into extinction, we will lead the people to a thriving and secure future. When we regain control of our holiest of sites, the Temple in Jerusalem, we will celebrate as we light the candelabra in continuing dedication to God.  We wish to live in peace, but as long as we have an enemy that wants to see us dead we will defend ourselves by any mean necessary.”

One programming note.  CNN will be continuing its ongoing documentary “Hellenism as opposed to Judaism.  Why it works in Jerusalem.” 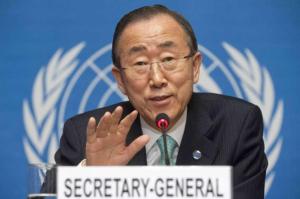 I write to you today out of concern for your reaction to a recent attack in Gaza you referred to as a “moral outrage and criminal act.” I will not address your outrage since that is a feeling one has and it is pointless to debate one’s feelings, but what can be, and in this case needs to be clarified is your definition of morality.

The outrage you speak of is caused by Israel’s attack on a United Nations school in which 10 people were killed.  It is without question another tragedy in a very tragic war.  However, if you are to use the term moral outrage now, I believe it prudent to ask you what exactly you deem moral and immoral.

Is it moral for “militants”, as your organization now refers to the terrorists of Hamas, to hide in hospitals and schools?  Is it moral to consistently fire missiles at Israeli population centers with one intent, to kill civilians?  You have moral outrage for Israel’s attack, an attack whose purpose was to target terrorists and sadly killed civilians, but you do not express similar outrage when Hamas targets Tel-Aviv with the sole intent of murdering civilians.  I understand Israel is a stronger force and that it’s ability to defend itself has prevented the amount of casualties Hamas has hoped for, but is the action itself not one deserving of your outrage?

Is it moral to agree to a cease-fire and shortly after ambush the opposing force’s soldiers killing three of them?  Hamas has had numerous opportunities to stop the fighting but has rejected each cease-fire.  If you truly feel so strongly about human life where is your moral outrage for the fact that Hamas insists on continuing the fighting?  Where is the moral outrage with an organization using billions of dollars in financial aid on weapons and terror tunnels while the people it pretends to care for live in squalor?  Is it moral that the leaders of Hamas travel in private jets and hide in luxury hotels in Qatar while it uses its citizens as pawns in its effort to wipe Israel off the face of the earth?  If your outrage was truly sincere you would hear that while one side calls for the other’s destruction, the one you and your organization consistently oppose calls for peace.

Myself, and many like me might listen to your organization more if it were not for the one-sided approach consistently exhibited when it comes to matters regarding Israel.  I took some time to look up some of the resolutions and condemnations over the years and one in particular made me feel moral outrage.  Just before Israel destroyed Iraq’s nuclear capabilities the United Nations passed a resolution calling for a nuclear-free Middle East, and soon after the attack passed a resolution condemning the attack despite the fact that Israel’s actions kept nuclear weapons out of the hands of a crazy and dangerous dictator.  I also look back at the warm welcome received by PLO Chairman Yasser Arafat and to this day question the credibility your organization gave to someone who waged his war by murdering innocent civilians.  There was no moral outrage then.  The UN then proceeded to provide the PLO support laying the groundwork for future terrorist organizations to gain acceptance on the world stage.  That fact alone puts a lot of blood on the collective hands of the United Nations even though it is something it will never openly accept accountability for.  It did however very efficiently proceed to pass the resolution equating Zionism with racism.  This treatment towards Israel has gone on for quite some time and is no surprise to anyone, but with all the facts so readily available today, your comments and the reaction of the United Nations as an institution are even more absurd than they were in the past.

I could speak of other atrocities such as having Syria, Libya and China on Human Rights councils over the years and the lack of action against Syria and ISIS today, but that would take too long.  The amount of criticism given to Israel while so many people are being murdered by brutal regimes and organizations all over the world, mostly Muslims I might add, is, and I use the phrase many like to use when criticizing Israel’s actions, a disproportionate response.

Quite frankly, and I say this without apology, the organization you lead has shown itself to be anti-Semitic beyond compare, and has functioned as though it is clearly in the pocket of the corrupt and the criminal.  While you call for investigations of Israel’s actions I call for an investigation of your actions and the actions of the organization you are running.  However, no one, myself included, is naive enough to believe there will ever be full disclosure of what takes place behind the scenes.  At the end of the day it is not about right and wrong, it is about money and power, something the United Nations has a lot of and therefore is bulletproof and untouchable.  When you have the degree of responsibility for funding and influence that you possess, to abuse it as you are doing Mr. Secretary General is a true moral outrage and criminal act of enormous proportions.