The Promising, the Disappointing, and the Dangerous on a Day of Unity 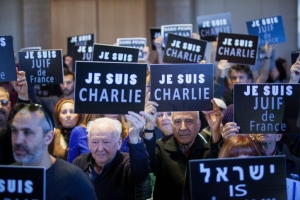 I admit I am somewhat encouraged.  It’s not often that Jewish life is given the global importance it’s been given since the murder of  hostages in a Paris supermarket.  I watched CNN and saw a focus on the French Jewish community I find moving and important.  It may be significant and it may be very helpful to the big picture, but it doesn’t change  one important fact.  The enemy is still coming for us.

Despite what some might think from reading some of my articles, I am actually an optimist.  I believe good can triumph over evil.  Call me naive, but it has happened many times before.  I sit here writing today because in 1945 good triumphed over evil.  So I know it has happened and can happen again.  I just would prefer it doesn’t happen with the high price we have paid in the past.  I am also aware of those politicians who are devious and looking to achieve personal gain.

Should we be impressed with a Turkish delegation at the march just 10 days after the female suspect in the attacks happened to travel through Turkey back to Syria.  Should we be impressed with seeing Mahmoud Abbas walking as close as he can to French President Francois Hollande during the rally? Should we be impressed with Hamas condemning the attack on Charlie Hebdo?  I think not. But here are the things we should be impressed with.  A young Muslim man saving Jewish lives in the Kosher supermarket in Paris, a Muslim woman holding up a sign that says “Je suis Juif”, “I am Jewish” during the rally, and coverage from a Paris synagogue that acknowledged the value of Jewish life.  There is some reason to be hopeful when millions of people speak up for good.  Problem is, some of this is mere political positioning and much of it is not enough.

We must be mindful of an attempt by those who are anti-Israel to separate the terror attack from the assault on the Jewish state.  In rallying against this attack and speaking out against terror everywhere, there are those who will attempt to lump Israel into that status of aggressor.  I love the idea of opposition to terror becoming a popular fad, but let’s make sure the dialogue remains accurate and that those trying to destroy Israel don’t try to change the reality in their favor.

I won’t mince words when discussing the one major disappointment of the day.  Shame on this current administration for being so conspicuously absent from the rally.  It magnifies for the entire world the major failings of this presidency.  There truly is no legitimate excuse for not having some sort of American representation at an event of this importance.

On the surface, since the attacks took place we have seen more good behavior than bad, but as Jews and supporters of Israel we do no have the luxury of trusting everyone’s intentions.   We need to watch carefully and expose those who would exploit this tragic week to forward their agenda and to remember that the fight is far from over.

One response to “The Promising, the Disappointing, and the Dangerous on a Day of Unity”