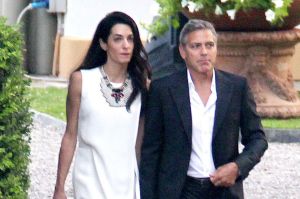 I admit I am a hopeless romantic.  I love it when two people get together, have the fairy tale love affair and get married in a beautiful wedding.  It brings joy to my heart.  But I’m not feeling it this time my friend.  What is usually the beautiful scent of romance in this case is replaced with the putrid stench of a disingenuous, political, self-serving union.

There are many who feel you and your Jew-hating bride are of little consequence.  Of course I would love that to be true, but the problem is that I think you may turn out to be a dangerous man.  For starters, the fact that you are “just an actor” doesn’t make me feel much better.  It is often mentioned that you have political aspirations and Americans have already shown they’d be willing to elect an actor to the highest office.  If you were as good of a man as the last actor to reach great heights in American politics I’d have no problem with that, unfortunately, not only are you not as good of a man as Ronald Reagan was, you’re not even as good of an actor.

As opposed to when I wrote my first letter to you, this time I’m convinced you share your wife’s views on Israel and the Middle East.  What I also now know is that you are a political coward.  You sit there and say nothing while your new anti-Semitic relatives do all the talking.  Your new father-in-law has declared your marriage is “very good news for the Middle East”.  I wouldn’t get too excited George,  I’m sure he always thinks it’s good news when two people who hate Israel get together.

I am sure I will be reprimanded by some for accusing you of something you never said, but let’s be real here.  By keeping quiet as often as you do, while your rabidly anti-Semitic wife and father-in-law speak,  you’re already making your statement loud and clear.  Of course coming right out and saying it might derail your political career, since after all, everyone knows the Jews control everything, right George? Just ask your new family.  They’ll tell you.

Unlike so many others out there I have no intention of congratulating you. Like I said, I’m a romantic.  I usually love this sort of thing.  But what usually is a fairy tale has the potential to be more of a scary tale, because like most dishonest people who wind up in politics, you are clearly going to try to hide your true feelings from the general public as long as possible.   Let me just tell you though, it’s going to be a lot harder to pretend you’re cool now that you’ve married into a family that hates Jews.  And if you do run for president one day you may have just lost New York, even if you did just win Michigan.

I would leave you with a Mazal Tov just to make you and your bride’s skin crawl both, but I just wouldn’t mean it.

This entry was posted on Tuesday, September 30th, 2014 at 11:36 pm and tagged with Amal Alamuddin, anti-Semitic, George Clooney, Israel, Middle East, Ronald Reagan and posted in Uncategorized. You can follow any responses to this entry through the RSS 2.0 feed.
« It’s Not God’s Fault
Misplaced Passions »