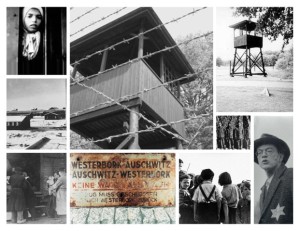 Many of the German Jews who fled to Holland when the Nazi persecution began to reach high levels found refuge in Westerbork.  A refugee camp set up by the Dutch government and largely  financed by the Jewish community to provide what was meant to be comfortable living conditions, Westerbork was to become a weapon of the Nazi terror machine after the occupation of Holland.  After 1940 it was turned into a Concentration Camp and Transit Center.  Most of the estimated 104,000 Dutch Jewish victims of the Holocaust would either pass through or perish in Westerbork.