If anti-Semitism in Europe is the appetizer, wait till you see the main course. 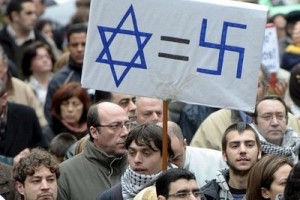 Anyone who knows even a little history knows that this is not Europe’s first go at anti-Jewish sentiment and actions.  However, this time around there are some significant differences, differences that could lead to the end of Europe as we now know it.

Traditionally anti-Semitism in Europe was government sanctioned.  The Spanish inquisition, Russian pogroms, Nazi Germany, Stalin’s U.S.S.R., all consisted of horrors and destruction for the Jews that were carried out by the ruling parties of each of these regimes.  In each one of these examples Jews were being eliminated because they were fraudulently declared a threat to the environment being created and were therefore, for all intents and purposes, illegal and harmful residents.  Today however, regardless of whether you call any particular nation in Europe a friend of the Jews or not, the anti-Semitism being generated comes more from mobs than governments.  At least for now.

These mobs are primarily organized and dominated by the Muslim communities of various countries.  Nothing represents the advancement of the Muslim cause in Europe more than France, where the mobs have turned so hateful and violent, Jews are starting to pick up and leave.  The behavior of these mobs is the precursor to what will ultimately be a much bigger issue in Europe, a radical new demographic.  That’s a technical way of saying an Islamic takeover.

I do not make this statement to be racist.  I would love to see a world where we all can live together in peace.  I know there are good and bad people in all races and religions, and yes, I have met many good Muslims.  But I also know, that only one group has leaders in their midst declaring a desire for world domination, a term not connected to such a significant threat since the days of Adolph Hitler.  Ironic that the Jews are being called Nazis, isn’t it?  I understand the Muslim fanatics drawing the comparison because it gets the people going and helps their cause.  Although they should know, that even though Hitler may have killed the Jews first, in a Europe such as the one we see today, if a Hitler-type rises to power, the Muslims would at worst be second.

The stupidity in all of this however is with the non-Muslims in Europe who are taking the side against Israel and the Jews.  I am not referring to decent people who are saddened by the events taking place in Gaza.  I am referring to those who are falling for the propaganda machine being used against Israel and the Jews, a machine getting a trial run before it takes on its much bigger target, anyone not Muslim.  Those who feel these mobs will stop at the Jews is not only not paying attention to what is happening, they are not being honest about its source.  If these mobs care so much about dead children, where have they been till now?  Ask them how many children have been murdered in Syria? Or better yet, tell them.  Over 9,000.  Let me repeat that.  Over 9,000 children have been killed in Syria. Where are the mobs protesting that?  Where are the signs equating the Syrian flag with the Swastika?  Then there is Mosul, a city of 1.8 million.  Interesting number.  Why?  Because Gaza has 1.8 million residents. But here is the difference.  150,000 Christians were recently attempting to flee because if they did not they would be slaughtered or forced to convert like those Christians that did not leave.  I am sure there are thousands of children in that number as well, but unlike Gaza, where the Israeli government actually wants people to see the truth, Mosul is unreachable by the press.  This allows ISIS to run rampant murdering and destroying anyone and anything they feel doesn’t help towards their goal of an Islamic Caliphate.  Where are the mobs protesting this?  Where are the signs comparing ISIS to Nazis?  Nowhere.

My point is that for these mobs it is not about the concern for the well-being of children, it is either about pushing their agenda or voicing their hatred for Jews.  When the time comes that governments need to fight against evil entities such as ISIS in Iraq or Boko Haram in Nigeria, or a nuclear Iran, just to keep Europe and the rest of the civilized world safe, the mobs will form all over again, and just like they are doing now, will pretend it is about dead babies.