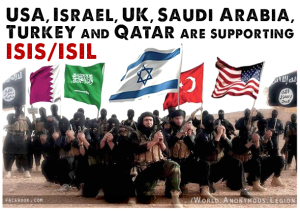 I’ve recently been, for lack of a better term, creeping or trolling on pro-Palestinian anti-Israel websites to get a sense of the latest lies being told and what the latest propaganda is coming out what I like to call, the Hamas information center.

A perfect example of this is the story they tell behind Israel’s financial reasons for “ethnic cleansing” in Gaza, particularly in light of a current arrangement Israel made with Jordan.  Israel will be supplying Jordan, a nation primarily consisting of Palestinians, with Natural Gas.  The story being told on some of the websites is that Gaza is sitting on an enormous amount of natural gas and that the real reason for the operation was to rid the area of Palestinians so that Israel could harvest the natural gas unimpeded.  Of course it has nothing to do with a constant barrage of missiles, kidnappings, murders and years of other terrorist activity.  It has nothing to do with  a charter of Hamas that calls for the death of all Jews.  Not to mention how ridiculous it is to claim Israel is killing off Palestinians in Gaza to facilitate providing Palestinians in Jordan with a more efficient and affordable source of energy.  But again, it doesn’t have to make sense when it’s an indictment on Israel.

Then there are these claims, the first of which may enrage many as it did me, claiming the 3 Yeshiva boys actually died in a car accident and Israel used it as an excuse to attack Gaza.  One person even goes as far as claiming the Israeli government killed the boys for this purpose.

And of course this weeks Number 1 on the Hit list, “ISIS, ISIS Baby.” In this case the lie is being promoted by none other than Fidel Castro (I swear I thought he was dead and sorry, I kind of wish he was) who backs up the claim that Israel created ISIS to create division within the Arab world and did so with the likes of the U.S. and U.K.  The following is displayed on top of a picture of ISIS leader al-Bagdadi, implying he said these exacts words, “We kill every man, woman, child Shia, Sunni…Zoroastrian, Kurd or Christian.  But we don’t touch Israel”.   Yeah, that makes sense.  Israel helps establish a Jihadist organization brutally killing Christians in its own backyard and helps mold them into a group that hates Jews even more than Christians.  It’s so ridiculous that if you were watching it in the movie theater you would likely walk out because it was too unrealistic.  But when it comes to Israel the first rule of storytelling isn’t that it makes sense.  The first rule is that it makes Israel look bad to as many people as possible.  Even when logic totally destroys the premise and contradicts the lie, these people still choose to believe it if it makes Israel guilty of something.

There were 2 comments in one group that were particularly enjoyable to read merely because it showed there are actual voices of reason.  Either that or there are people who take it a little further than I do, make up names and attempt to wreak some havoc.  Here are my 2 favorite comments.

“I wonder from where Hamas’ propaganda machine will get more photos of dead children now that the fighting is over. Oh well, guess there are plenty of dead children in Syria and Iraq that you don’t care about…”

And my personal favorite:

“Thank you Hamas for enslaving us and protecting us! I love how you never let me out of my house and killed my entire family. Thank you!”

Of course it doesn’t matter, because for those who believe the lies, those comments are the  words of the brainwashed or misguided. They must be if they don’t think Israel does everything wrong, no matter how little sense it might make.

I’ll understand if you say, “I don’t care what idiots say”, but the problem is, there are a lot of idiots.  And occasionally they do more than just talk or type. In the meantime I admit that when I see these things I go back and forth between amused and disturbed.  Amused by how bizarre some of these claims are, and disturbed by the overwhelming amount of people who believe the lies no matter how crazy they may sound.  But what do I know about the truth?  I’m a Zionist.

As a son of Holocaust survivors it would be obvious why remembering what happened to the Jewish people during the reign of the Nazis would be of importance and significance to me.  What I am going to attempt to do in this post is briefly show why it should be important to everyone.

There is a cancer in the world today.  This cancer is the movement known as Holocaust denial.  I am Jewish, and on this site and the book I have written there is a focus on the horrors that befell the Jewish people.  I make no apologies for where I focus my efforts.  However, I also recognize that although 6 million is a staggering number, the Jewish people are not alone in their suffering.  Whether it was African slave trading, the Khmer Rouge’s Cambodian genocide,  the policy of “ethnic cleansing” in Bosnia, the genocides in Cyprus, Rwanda, and Darfur,  our world has been tarnished by numerous examples of mass persecution and genocide.  I am making no attempt to compare suffering, and I am not missing out on mentioning any group intentionally.  All I have done is take some notable examples of mass persecution and genocide in history to make an important point.

How can we say “NEVER AGAIN”, if we have to fight those who want to challenge that it happened in the first place.  Ignore a cancer and it spreads.  And when it spreads it poisons the entire body.