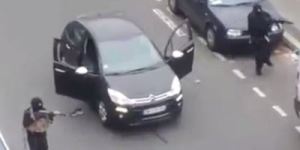 There are now 2 reported hostage situations in Paris including a Kosher grocery store.  The hostage takers in the supermarket, a Muslim couple, have threatened to kill the hostages unless the authorities release the Kouachi brothers.  Now, do we have any question as to whether or not this is a coordinated effort? Do we still want to question whether or not this is a war taking place against civilization of which Paris is today’s ground zero?  And most importantly, do we still wish to dance around the fact that this is indeed a Muslim problem?  People who know me well know that I am the furthest thing from a bigot.  That doesn’t make me blind or stupid.  The world is under attack from Muslim extremists, and as I have said before, the time will come when a world leader or some group of people have had enough.  When that time comes claims of Islamophobia will mean nothing if those who cry foul then do nothing now.

Things are bad today, but they will only get worse unless those who can effect change stand up now.  Soon it will be too late.

For the record, I am an optimist by nature.

This entry was posted on Friday, January 9th, 2015 at 11:41 am and tagged with Islamophobia, Kosher supermarket, Kouachi brothers, Muslim, Paris terror attack and posted in Uncategorized. You can follow any responses to this entry through the RSS 2.0 feed.
« Open Letter to Greta Berlin in response to her claim of Mossad responsibility for The Paris Massacre
Paris Hostage Update »