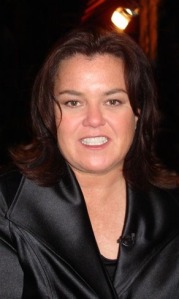 As someone who has to at least some extent defended and supported you in the past, I can’t begin to tell you how disappointed I am with what you have done.  I haven’t listened to everything you’ve always said, but as someone who is comfortable with your personal choices and as someone who enjoys hearing someone give an exuberant opinion, I have at the very least been a borderline fan. However, this time you crossed over from exuberance to idiocy, and as a result you are now hearing from me.

Here’s the thing Rosie.  As someone who opines on a regular basis I understand that in doing so I open myself up for criticism if and when I do or say something wrong.  Subsequently it takes a degree of confidence in one’s ethical approach to choose to be a voice.  Over the years you have been one VERY loud voice.  In doing so however, you’ve also reached a point where you are required to be responsible.  Many people have paid attention to at least some of what you have said, and many continue to listen to you.  To be very blunt, I hope they stop doing so.  Any credibility you may have had in my eyes, is now gone.  And here is why.

This is wrong on so many levels that I  am almost embarrassed to say I once liked you.  Your Limited Edition Acrylic Artwork designed and drawn by Rosie is one, everything people legitimately criticize about Americans. Two, so incredibly irresponsible in its inaccuracy.  And three, so focused on putting down Israel it is downright gross, not to mention offensive.  I will break it down for you.

You have a picture of a man holding a wounded baby and you write, “Israel beings bombing Gaza-This man carries a baby about the same age as the one I sit next to, watching Frozen”.  CLICK HERE TO SEE.

Rosie, I love America. Even when I disagree with the government or see stupidity that can be interpreted as indigenous to our society, I am proud to be an American.  Those who criticize Americans will say that we commercialize everything and often do so in shallow and ignorant fashion.  I suspect that many will use your “art” as a prime example of this shallow ignorance. Then again, if they are haters of Israel and the Jews they will gravitate to it, because shallow stupidity is forgivable when done to put down Israel and the Jewish people.

That’s not even the biggest problem with all of this Rosie.  That picture wasn’t taken in Gaza and this man is not holding a baby wounded in an Israeli attack.  This is the aftermath of a Syrian government attack on its own people.  An attack that is just one of many in a civil war that has killed almost 200,000 people.  Once again you show it is easier, and in some people’s minds hipper to attack Israel than to go after the real evil.

On a side, but rather mind-boggling note, maybe you can answer this question for me.  Why on earth would someone who has fought hard for the rights of the LGBT community go after the one government in the entire Middle East where gays and lesbians are allowed to live freely and without persecution?  Not to mention the fact that you did so in such blatantly inaccurate fashion.

I want an apology Rosie.  I want one for the entire Jewish community and I want one for the State of Israel.  If we do not get one from you, your integrity is gone for good.  You’ve always been a loud voice and one who has always claimed to be a straight shooter. Well in this case you are shooting wildly, inaccurately, and with a mean and subtle venom.  I want an apology and a retraction. Anything short of this will show you to be part of the very hypocrisy you’ve always claimed to fight against.

Do the right thing or stop talking, because if you don’t, you’re just another dumb voice without any substance.

This entry was posted on Thursday, December 11th, 2014 at 3:22 pm and tagged with Frozen, Gaza, Israel, Rosie O'Donnell, Syria, Syrian Civil War and posted in Uncategorized. You can follow any responses to this entry through the RSS 2.0 feed.
« Holiday Gift Idea
UN calls on the Maccabees to avoid hostilities »