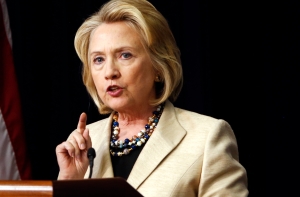 With the midterm election results just hours away, Republicans and Democrats everywhere are hopeful their candidate will come out victorious. We know that leaders on both sides declare their loyalty to the party and in most cases they probably mean it.  With one possible exception. The presidential hopeful.

The argument can be made that whatever party takes control of the Senate will not be the party that wins the White House in 2016.  It may be pessimistic on my part to feel this way, but there’s no real reason to feel confident that things will get that much better over the next 2 years.  It’s likely that if things continue to go south, this growing trend of reactionary voting will only pick up more steam.  If that’s the case you have to believe that somewhere not that far in the back of Hillary Clinton’s mind she’s not all that devastated with the thought of today being a big day for Republicans.

There’s just too much work to do for anyone to be that hopeful things will look that much better 2 years from now.  Whatever party controls the Senate is more likely to suffer more backlash than that caused by one man in the White House.  That’s why it’s not crazy to predict that whatever party has a bigger day is the party that loses the presidency in 2016.  Plus the Republicans are pushing the idea that reestablishing their dominance in government will make your life better. It may or may not be the case down the road, but it won’t be in time to help the next Republican candidate.  Based on many news reports indicating a big day for the GOP, that may very well mean the big winner in the Democratic Party coming out of today’s elections will be Hillary Clinton.

This entry was posted on Tuesday, November 4th, 2014 at 11:52 am and tagged with Democrats, GOP, Hillary Clinton, mid term elections, president, Republicans, White House and posted in Uncategorized. You can follow any responses to this entry through the RSS 2.0 feed.
« Open Letter to Hypocrites Everywhere
Minitron is MegaAwesome »