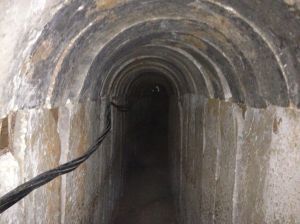 This is a post I was reluctant to write because it poses a question I am so hesitant to ask. Let me start by saying this. To my brothers and sisters in Israel, if your nerves are on edge and the suggestion of something terrifying will be unpleasant for you to read, please stop reading this now and move on to something else.

It’s the question people are afraid to ask, but needs to be addressed. Now that we know of the terror tunnels that exist from Gaza to Southern Israel, how do we know that similar tunnels are not being built to Israel’s north and to Israel’s east? The news out of Israel now is that recently captured Hamas terrorists revealed a plot to send terrorists trough these tunnels this coming Rosh Hashana, just under 2 months from now and murder and kidnap as many Israelis as possible. Israel is surrounded by people committed to her destruction and to think that it is not at least a reasonable possibility that there are tunnels on other borders would be irresponsibly naive. I posed the question to an Israeli family member of mine and his response was quick and succinct. He basically believes the Israeli government now assumes, as does he, that terror tunnels are being or have been built on other borders as well.

Let me be very clear. I am proposing a question, not providing verified information. But knowing the barbarism of the enemy, and understanding that the enemy is on more than just one front, to ignore the possibility could be devastating.

It must be emphasized and can’t be said enough, that despite the horrific tragedy of the kidnapping and murder of the 3 Yeshiva boys, their death has come to have incredible meaning. Their murders triggered this campaign that discovered this evil plot to kill thousands of Jewish residents of southern Israel. The lives saved by their deaths is something quite astounding and makes their memory even more special to everyone.

This entry was posted on Sunday, July 27th, 2014 at 1:23 am and tagged with Bring Back our Boys, Gaza, Hamas, Israel, Rosh Hashana, Southern Israel, terrorists and posted in Uncategorized. You can follow any responses to this entry through the RSS 2.0 feed.
« Previous Post
Next Post »