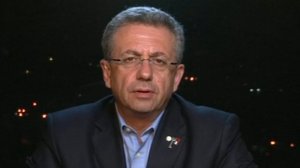 After watching Mustafa Barghouti, General Secretary of the Palestinian Initiative being interviewed by Brett Baier of FOX News, I found myself somewhat sickened by the distortion of the facts by this man who calls himself a Palestinian activist.  If this man is truly working for his people, how come he is so comfortable spewing out lies that drive his people to war.  I believe the answer lies in his own personal ambition for fortune and power.

The cynical way he lied to the camera, speaking of Hamas as though they were a legitimate partner in peace indeed tells a more tragic story.  Neither Hamas nor the Palestinian Authority  are legitimate partners in peace.  He looked straight at the camera, fully aware that Israel has done everything its power to minimize civilian casualties, and declared that Israel is targeting women and children.  The hypocrisy of his preaching a non-violent resistance while lying so blatantly and supporting Hamas in Gaza should be obvious to most.  There’s just one problem.  There is a saying, “if he had brains he’d be dangerous.”  What we see here is  a man who has brains and is indeed very dangerous.  As he looks into the camera and tells lies about Israel’s intentions and who is to blame for this conflict, he does so in a convincing and eloquent manner, allowing those who wish to believe the lies the opportunity they are looking for.

As we know, lies are being told about Israel every day while Hamas hides in schools and hospitals, but the problem becomes when someone like Barghouti tells these lies, and does so over and over, they become believable to far too many people.  And that is one battle in the war we will have serious problems overcoming.  Especially since it is one we will not fight the same way.

This entry was posted on Monday, July 21st, 2014 at 9:08 pm and tagged with Brett Baier, Bring Back our Boys, FOX News, Gaza, Hamas, Israel, Mustafa Barghouti, Palestinian, Palestinian Authority, Palestinian National Initiative and posted in Uncategorized. You can follow any responses to this entry through the RSS 2.0 feed.
« Hollow demands
If a Plane Went down, Would they blame Israel? »