In Support of Greek Jewry 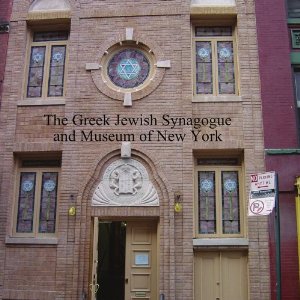 As documented in the book Jew Face, the nation of Holland had 75% of its Jewish population murdered by the Nazis during the Holocaust.  Another nation with one of the smaller Jewish populations which suffered similar devastation was the country of Greece.  Between 60,000-70,000 Greek Jews were murdered in the Holocaust, most of them in Auschwitz.  At the end of the war an estimated 8-10,000 survived.  Keeping alive the rich history and culture of Greek Judaism with such a small number remaining is a difficult task, one which my friend Richard Solomon has taken upon himself to do.  The following is a link where you can acquire a CD  of a discussion about Greek Jewish history and the Greek Jewish Synagogue and Museum of New York.Go to http://kkjsm.org/ and help keep alive the Greek Jewish history and culture.

This entry was posted on Friday, June 29th, 2012 at 2:32 am and tagged with Auschwitz, Greece, Greek, Greek Jewish Synagogue and Museum of New York, Greek Jews, Holland, Holocaust, Jew Face, Jewish, Jewish population, Nazis, Richard Solomon and posted in Uncategorized. You can follow any responses to this entry through the RSS 2.0 feed.
« Europe 1940 to Euro 2012
Remembering a Jewish Hero »