You’ll have to forgive me Mr. President. I’m a Jew and I’ve been hurt before 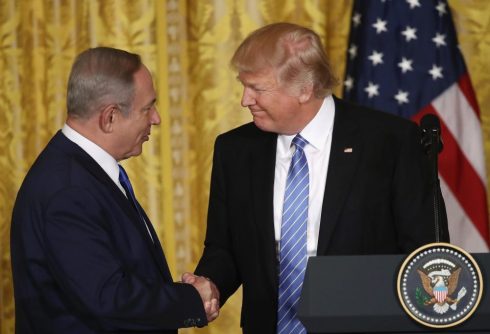 I know as a Jew and a Zionist I am supposed to feel all warm and fuzzy today.  After all the President of the United States did greet the Israeli Prime Minister with great respect and they expressed their long lasting friendship.  To make it even better, President Trump went as far as saying that he would move the U.S. Embassy to Jerusalem.  That’s never been said before. Oh wait. It has been said before. By just about everyone else to run or step into the office since at least the mid 90s.  So although I appreciate the nice words, right now they are nothing more than that, and as a Jew I am yet to be convinced.

For example, outgoing President Barack Obama, a disappointment to so much of the Jewish community started off by making the following comments.

“Let me be clear,“Israel’s security is sacrosanct. It is non-negotiable. … Any agreement with the Palestinian people must preserve Israel’s identity as a Jewish state with secure, recognized, defensible borders.”

“Jerusalem will remain the capital of Israel and it must remain undivided.”

Go back to recently defeated candidate Hillary Clinton who wrote the following in a letter, dated July 2, 1999 to Dr. Mandell Ganchrow of the Orthodox Union in New York.

“If I am chosen by New Yorkers to be their senator, or in whatever position I find myself in the years to come, you can be sure that I will be an active, committed advocate for a strong and secure Israel, able to live in peace with its neighbors, with the United States Embassy located in its capital, Jerusalem.”

Her husband, former President Bill Clinton declared in February 1992, at the height of the Democratic primaries, that he supported recognizing Jerusalem as Israel’s capital, a step that would alter U.S. policy, but never signed the 1995 congressional mandate to move the embassy.

Senator John McCain pledged to move the U.S. embassy in Israel “right away” from Tel Aviv to Jerusalem as did Senator Robert Dole and George W. Bush who actually did become president.  Candidate Bush made the pledge to move the embassy on his first day in office. Once in office he said he went from doing it on the first day to saying he would begin the process on his first day.  Instead he signed a waiver every 6 months delaying the same 1995 congressional mandate and in the end never did it.

Enter President Donald J. Trump.  Yes he has said some very nice things. He too promised to move the embassy to Jerusalem.  But now he is looking into it. He promised to rip of the Iran deal on his first day.  We must have missed it. And he publicly stated the following at a press conference with Israeli Prime Minister Benjamin Netanyahu

“I would like you to hold back on settlements for a little bit.”

Donald Trump may end up being the best friend Israel ever had in the Oval Office.  I certainly hope so.  But forgive me if I’m not ready to throw a party yet. I’ve heard this song before.