Of Course Holland lost..They’re my team 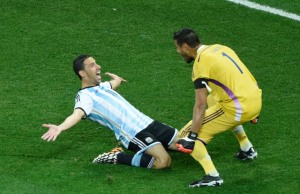 Behind every perception of destiny, irony sits waiting and ready to pounce.  But I will get back to that.  The title of this post is by no means rooted in self-pity. Pity is never the feeling I have regarding the futility of the teams I support.  As a somewhat well-adjusted individual, I generally get past the pain of my sports teams’ demise within an hour of it happening.  I must say I am pretty good when it comes to that.  After all, and this is the root of the title, I have a lot of experience with it.

We can of course start with the most recent result of which irony played a major factor as well.  But again, I will get back to the irony later.  When the Netherlands lost to Argentina yesterday in the FIFA 2014 World Cup semi-final, I knew that another World Cup would be played without Holland lifting the trophy.  I watched Holland once again secure its position as the best team to never win the World Cup.  I took solace in the fact that they lost with class to a team with class, but nevertheless, once again, their World Cup ended in defeat.

I move on to the National Football League.  I credit the great New York Giant linebacker Lawrence Taylor with getting me into football.  Sure I watched the game and followed the playoffs and Super Bowl, admiring the skills of Joe Montana and Jerry Rice in particular, but it was LT who got me excited about the game.  And living in New York I cheered on the football Giants when they won their Super Bowls with Taylor, Simms, etc.  But it was not till I began to admire the tough character and skill of Philadelphia Eagles Quarterback Donovan Mcnabb, and enjoyed games with my family that I considered myself a true fan of a team.  The Eagles would go on to 4 straight NFC Championships and one Super Bowl, but would never win the big one.  And as football fans know, they still haven’t.

In 1976 I began what would be 4 years of school in London, England.  I picked a team.  Sure, I could have picked Arsenal just as easily, a team that won titles and cups, but no, I picked Tottenham Hotspur, probably the most consistently mediocre team in any sport in any country.  And since they are exceedingly mediocre, that’s all they are getting in this piece.

Then there is the team I am most emotionally invested in on a yearly basis, the Philadelphia Flyer of the National Hockey League.  Having lived in Philadelphia during their 2 glorious Stanley Cup victories, I will always be a devoted fan.  Even if we end up never winning another cup.  Does it count at all when the Los Angeles Kings win?  Flyers fans and educated hockey fans understand that question.

Lastly I will speak of Major League Baseball’s New York Mets.  In 1985 when I moved to New York I picked a team as my local team.  I picked the very charismatic and entertaining Mets.  In 1986 I got my immediate reward, s the Mets not only won the World Series, they won it in the most dramatic and exciting of fashions.  The 1986 Mets have been the reason I have remained a fan of theirs till now, despite the fact that they are generally not very good.  And since I am a fan, when I say it that way, I am being nice.  The greatest overall significance of my support of the Mets now is that their 1986 team is the last team I am a fan of to win a championship in their sport.  Yes, that is almost 30 years.

And on it goes.  Yes I pushed the idea of Holland’s World Cup destiny, and the fate surrounding the teams they would need to beat, and of course started the online campaign of “Win it for my mother”, but in the end it was not to be.  My mother, whose maiden name was Rodrigues-Lopes, or in every day use, just Rodrigues, was the son of Marcel Rodrigues.  My grandfather’s nickname was Max.  So he was indeed known by many as Max Rodrigues.  So when Argentina needed just one more goal in penalty kicks to put them through to the finals and send Holland packing, I looked down, smiled wryly, shook my head and mumbled to myself, “of course”.  Stepping up to take the kick was Argentinian football veteran Maxi Rodriguez, who subsequently put the ball in the back of the net and guaranteed Holland would once again not the win the World Cup.  I guess I was right.  Sports destiny did play a factor.  It just did so with a tremendous sense of irony.  Good thing it only takes me an hour to get over it.