Bush, Clinton, the Borg, and the futility of the voting process 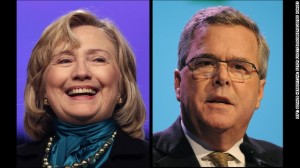 As a fan of Star Trek the phrase “resistance is futile” comes to mind when thinking about the American presidential election process.  For those who are not Star Trek geeks like me, this refers to the alien race known as the Borg that appeared in some of the Star Trek series and movies and had their way with every race they wished to assimilate into their culture. For the most part I am not a conspiracy theorist, so I am not that guy who believes that a few people have predetermined who is going to run things, but I do believe our democracy is controlled by money and power and when deciding the presidency, any resistance is indeed an act of futility.  When it comes to money and power on the Republican side, the Bush family is certainly entrenched near or at the top of the pile. Although the Clinton’s don’t wield the same amount of either money or power as the Bush clan does, they’ve achieved a power and influence within the Democratic party that leaves Hilary Clinton virtually unchallenged in her pursuit of the presidency.  Is this a good thing? I guess it depends on who you ask.

We could start by saying that the fact that “resistance is futile” is never a good thing.  Of course this is up for debate since there are plenty of Republicans who will tell you they prefer Scott Walker,Ted Cruz, even Rand Paul or any of the other cast of characters throwing their hat into the ring, but the reality is that once the Bush people start spending their money and wielding their influence it’s hard to see anyone else in the Republican party winning the nomination.  From the Democratic Party side, even if one was a strong supporter of the Bill Clinton presidency, some questions still remain at the wisdom of a Hilary candidacy.  Maybe she would rise to the top of a more competitive field anyway, but the reality is that she is so assured of the nomination that Republican hopefuls already find themselves campaigning against her. So the truth is, not only is resistance futile, one might say voting is as well.

I’m a sports fan.  I love when the outcome of a season is uncertain.  So 2 years ago in the NFL when Seattle predictably made it to the Super Bowl against Denver, and to many predictably won the game, despite my love for the sport I was not thrilled by what I watched that entire postseason. I always love the presidential election cycle.  I find it enthralling, exciting, even fascinating.  I find it hard to stop watching.  Unfortunately this time I find it very predictable and subsequently losing a lot of its luster.  I am rather certain it will be a Bush against a Clinton, and since the Democrats just had 8 years in the White House, most likely it ends up with the Bush winning.  I won’t even talk about who I like better and whether or not I think either one would be good for the country, because in the end this is how it will turn out regardless, and my opinion, let alone my vote, will have no impact on the end result.  The frightening part to all of this is that this upcoming presidential election may be one of the most important in recent history and the American people are at the mercy of the money and power of a small group of people.

At least that’s my opinion. If it turns out otherwise I’ll eat crow, but I’m rather confident it won’t. After all, resistance is futile.