Jewish teachings say that the very existence of our world rests on the righteousness of 36 individuals. It is believed that these 36 are hidden, inasmuch as there is no public declaration by them or any public organization or group mentioning who these people may be.  All we know is that the belief is that without them the world loses its very foundation of decency and kindness.  Although these are teachings no one can ever prove, as I got older and acquired a greater understanding, I had all the proof I needed in the people I referred to as Oom Bertus & Tante Geisje. 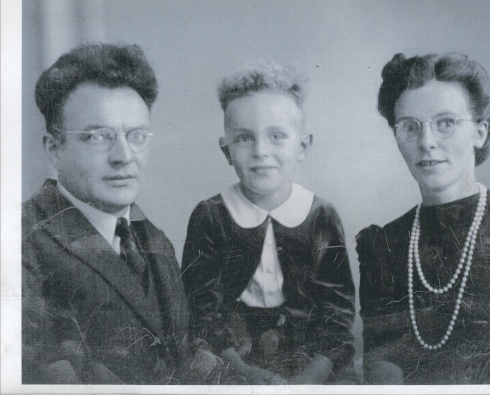 In the waning months of the year 1944, Lubertus & Geeske te Kiefte were the parents of a 7 year old boy and expecting parents of what would turn out to be their first of 2 daughters.  They lived a quiet life in the Dutch countryside.  Although the war was hard on the entire country, had they chosen not to be involved in the consequences of the Nazi occupation, they could have lived a risk free life without concern of any retribution.  But the te Keiftes were not wired that way.  Bertus’s activities in the resistance lead to the fateful day when a short, pretty, dark-haired and dark complexioned woman showed up at their door soaking wet in the middle of the night.   Bertus took one look at this woman and his heart melted with compassion. Geeske immediately saw to her well-being, providing her with dry clothing and a warm meal   For the next 16 months the woman would live with them in Lemerlerved, sleeping every night in a room Bertus built under his workplace so that she would not be detected had the Nazis showed up unexpectedly to do a random search.  For the 16 months that the woman stayed with the te Keiftes she was fed, cared for and treated like a member of the family.  The one man in town known for being sympathetic to the Nazi cause was warned of the consequences should any harm come to the woman.

Those 16 months would be the foundation of a friendship so special it would go beyond the woman, Bertus and Geeske.  It would carry on for generations, making 2 entirely different families see each other as one family, no matter the distance, time or religious belief.  The woman they hid and whose life they saved was my mother Sipora Groen, born Sipora Rodrigues-Lopes.  The relationship was so strong that to this day descendants on both sides refer to each other as family.  I loved going to visit them as a kid, enjoying it so much that I miss them till today and truly believe that if not for Oom Bertus and Tante Geisje, I would not be here to share this story.