On International Woman’s Day: A Tribute to the Famous Woman I admire most. My mother 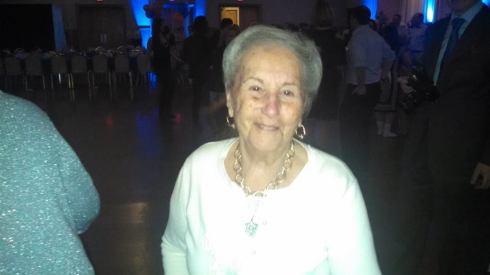 Today is International Woman’s Day and one of my social media friends posted the question, “Which famous woman do you admire most?”  Although my initial reaction was to say Golda Meir, I chose to change my answer to Sipora Groen.  Sipora Groen is my mother, and although my book about my parents and how they survived the 4 years of Nazi occupation in Holland isn’t the bestseller I naturally hoped it would be, I think enough people know about my mother to classify her as famous.  If that’s not enough, let me tell you why how admirable she is makes up for where you may not consider her famous enough for this discussion.

Sipora Rodrigues-Lopes was born in Amsterdam on January 1, 1922.  Sipora lost her mother when she was a young girl of only 13 and  was left with a large share of the responsibility in raising her younger brother Bram.  Prior to the war Sipora fell in love and got engaged to a young man named Hans.  At the outbreak of the war in Holland she was studying to be a nurse, and when the Nazis occupied Amsterdam and began the process of rounding up the Jews and transporting them to the death camps, Sipora was living in the nurse’s quarters of the Jewish hospital.  Her personal life was turned upside down seemingly forever when not only her father and brother fled Amsterdam to ultimately be captured and murdered by the Nazis, but the love of her life and fiance Hans was taken away to Auschwitz.  Alone and feeling hopeless, all she had was the work she had taking care of the sick patients.  If not for Nardus Groen, my father of blessed memory,  the man she would later spend her life with, she likely would have been transported to her death along with the majority of the patients.  Instead she began a journey with Nardus through the Dutch countryside that took her from place to place, through homes of righteous Dutch people who put the value of life over religious belief or personal danger.  Ultimately she ended up in the home of Lubertus & Geeske te Kiefte, the righteous and courageous couple that risked sacrificing everything in order to give her a safe home in the small town of Lemerlerveld for almost a year and a half until the war ended.

As the war ended in Europe, Nardus joined the Dutch Marines to help in the fight against the Japanese, not knowing till later that Sipora was pregnant with his child.  Part of the reason Nardus didn’t know was because originally Sipora didn’t know.  She took a job in a local hospital when upon feeling tired and worn down she was told by the Director of the hospital that she was indeed with child.  She moved back to Amsterdam only to find her home now occupied by the housekeeper who was with the family before the war.  The housekeeper pushed Sipora to leave the house despite her now advanced pregnancy, forcing her to take a very small apartment with very little heat in winter. If not for the help of her father’s childhood friend who gave money for her new home, Sipora might have found herself pregnant and homeless right right after spending 5 years running and hiding from the Nazis and losing so many of the people closest to her.  Just a few months after the birth of her son Marcel, Sipora would contract the lung disease known as pleurisy and would spend months in the hospital away from what felt like the one hope she had in life, her newborn son.

With his love for Sipora and a now a son, Nardus chose to leave the military and return to Holland where he would try to help rebuild the now decimated Jewish community.  He would be ordained as a Rabbi and start the process of building a family with Sipora who was now his wife.

Nardus and Sipora would have 5 children and would move often from place to place.  They ended up in America in the late 1950’s where they would live till 1976.  In 1976 they would move back to Holland where Nardus would take over a synagogue in the town of Arnhem while taking on responsibilities of the Jewish communities in 6 provinces throughout the country.  At the same time Sipora would become Director of the Jewish old age home in Arhem where she would be loved and respected by residents and employees alike.   After years of hard work between the 2 of the them, and setting themselves up for their senior years, Nardus and Sipora would retire, first to the Dutch seaside town of Zandvoort and later to Boynton Beach, Florida.

On June 13 of this year it will be 10 years since my father Nardus Groen passed away.  I’ve learned this about my mother during the time since his death.  This is in many ways my mother Sipora’s 5th life.  The first life, the most innocent and peaceful was the one she lived till the age of 13 when she lost her mother.  The second was the next 5 years, a time of peace in Europe but a time of both love and difficulty for Sipora.   The 3rd, and unquestionably the hardest was the 5 years of the war, a time we can try to comprehend but never fully understand.  The 4th were the relatively normal but still often very difficult years following the war, where she and Nardus worked hard and sacrificed to raise 5 children, experiencing all the trials and tribulations any family would during decades of normal life.  This was the longest of her lives to date as it would last till the death of Nardus over 60 years later.

The 5th life, and in some ways the most remarkable one is the one she is living now.  It is the life she has lived since my father’s death 10 years ago.  On January 1st Sipora Groen turned 95 years old.  This is a woman who reinvented herself upon becoming a widow while simultaneously honoring the memory of the man she still loves today.  She drives, she shops, she host Mahjong games, threw her own 95th birthday party on her own insistence, takes plane and train rides alone, is an active member of her synagogue and even has her own Facebook account. But what is most remarkable is the love of life she displays and the warmth she shows for family and friends, a warmth that can only be credited to a strength of will and character unimaginable to most of us.

In those moments when I would feel unreasonable self-pity I would sometimes ask myself, why can’t I be that guy?  The guy born into money with no worries, or the guy with incredible talent recognized by millions, or that person living the charmed life where very little ever goes wrong.  But not so long ago I realized I am that guy, because I am the son of a 95 year old mother who you just read about and who not only has gone through and achieved everything I wrote about, but has the incredible state of mind to enjoy it and share her joys with those around her.   You want to recognize someone admirable on International Woman’s Day, you need go no further than my mother, Sipora Groen.

This entry was posted on Wednesday, March 8th, 2017 at 3:31 pm and tagged with Amsterdam, Auschwitz, Boynton Beach, Florida, Golda Meir, Holland, Jews, Lemerlerveld, Lubertus & Geeske te Kiefte, Marcel Groen, Nardus Groen, Nazis, Sipora Groen, Zandvoort and posted in Uncategorized. You can follow any responses to this entry through the RSS 2.0 feed.
« Open Letter to the Jewish community: It’s time to unite
Purim 2017 as it might have been reported on FOX or MSNBC »