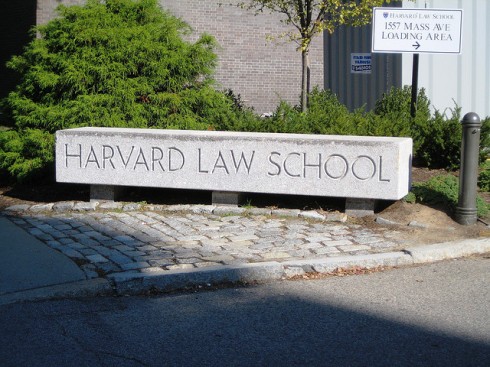 Since you do not know me let me start by telling you that I am clearly not as smart as you are.    I do not have a Harvard education of any sort nor do I hold a law degree from anywhere.  So it goes without saying that I am not on the intellectual level of the Dean of Harvard Law School.  What I am is a man who writes books, articles and letters that are sometimes appealing enough to get the attention of an audience. So naturally there is nothing I can teach someone who runs something as prestigious as your institution. Or so it would seem.

As someone who has the responsibility of seeing to it that your school maintains some degree of integrity and credibility, how is that you have chosen to protect the identity of a blatant anti-Semite?  The old axiom, it’s what you do, not what you say, is very much at the heart of this problem.  For Harvard Law to openly come out and condemn the actions of someone interrupting the former Israeli Foreign Minister Tzipi Livni not with respectful argument and discourse, but by calling her “smelly”,  is merely a first step on the part of your institution, a step very much wiped out by your unwillingness to disclose the individuals name.  To make matters worse, the university apparently deleted a portion of a video showing the alleged culprit, Husam El-Coolaq making his rude and classless attack.  I know you are smarter than I am, we’ve already established that, but to take me and others like me for fools by condemning the statements while protecting the individual responsible for the statements is not only an insult to the principals of Jews and Zionists worldwide, it is also an insult to our intelligence.

Perhaps if you imagine this being done in reverse you would have an easier time dealing with this correctly, since apparently academia today seems to favor the plight of the Palestinians over the fair treatment of Israel and the Jewish people.  In the meantime I would like to take this opportunity to tell you that this type of behavior on the part of Harvard Law does nothing to distinguish the institution over any other institution, at least not in any positive manner.

If you are to help form minds to defend all that is right, I urge you to start by taking this opportunity to do what is correct rather than succumb to the pressure or agenda of those who are hijacking institutions of higher learning through a perversion of the truth or possibly even worse through a greater amount of funding.  If you do that, Harvard Law may just distinguish itself from other failing or mediocre institutions and continue to educate and prepare great minds in defense of the law.

This entry was posted on Monday, April 25th, 2016 at 3:13 pm and tagged with Harvard law School, Husam El-Coolaq, Israeli, Martha Minow, Tzipi Livni and posted in Uncategorized. You can follow any responses to this entry through the RSS 2.0 feed.
« God’s Disproportionate Response to Egypt
Open Letter to Bill O’Reilly Regarding Media Involvement in Trump’s success »