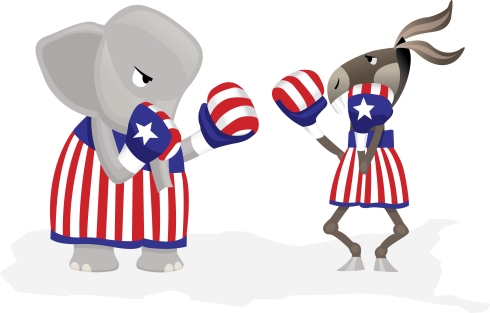 I’ve lost count how many times during this election cycle I’ve said the following words, “I’ve never seen anything like this”, only to follow up almost immediately with, “no one’s ever seen anything like this”.  We all know that this is unlike anything we’ve ever seen in an American presidential election.  The behavior of the candidates toward one another and the reaction of the population to the different candidates is unprecedented in American history.  What’s been lost in the discussion is the passion generated among regular people and the schisms caused not just among friends and acquaintances, but even families.

The days of agreeing to disagree are crumbling at an alarming rate.  No longer is it enough to say you are not voting for someone.  If you don’t philosophically smash them into the ground, call them a racist, a criminal or a degenerate, you yourself may be attacked.  Like Donald Trump?  You must be a racist and bigot.  Like Hillary?  You support murderers and liars?  Like Ted Cruz?  You must be a fascist and religious fanatic? Like Bernie Sanders? You must be a Socialist or Communist?  Like John Kasich?  Well then , you’re just a waste of time.

No longer can you support someone and not be called names by those who oppose your candidate.  To make matters worse, everyone is right?  Just ask them.  And I don’t mean the candidates, they’re supposed to say they are right.  I am talking about the people you interact with.  Heaven forbid you say something bad about Hillary Clinton to a Democrat.  You’re likely to cause a venom and anger that could ruin the relationship.  And don’t dare call out Donald Trump for his behavior.  You might be seen by your “friends” as an ISIS sympathizer.

There was once a time when people would disagree on politicians and the reactions would not be personal.  But nowadays, if you hold a different viewpoint, friendships can disintegrate into thin air.  After all, if your friends like Hillary more than Bernie, how can they respect you?

So how did we get here?  3 reasons.  Reality TV, Internet, and tough times.

The Reality TV part of it explains the ongoing craving for drama and sensationalism. It’s very much a part of what makes Donald Trump’s candidacy tick.  It certainly is what has helped him get all the attention he gets.  That and of course the aforementioned internet and tough times.

The Internet might not make everyone happy, but it’s a reality not just in American politics but in everything happening in the world today.  Nothing illustrates it as well as the fact that ISIS relies on it for recruiting up and coming terrorists.  So with all the exposure and information available, we now know not only more than we used to know about candidates, but probably more than we would like to know as well.

Lastly, the truth is these really are very trying times in almost every aspect of life. These difficulties breed tensions, and these tensions breed passion.  The issue of who will be the next leader of the free world matters more to people than maybe ever before, so if you don’t agree with your colleague, neighbor or relative, this really can turn into a big deal.

All I can hope is that people stay as civilized as possible.  In the meantime I hope to maintain as many positive relationships as possible with friends and family while still maintaining the integrity of my viewpoints.   I wish all of you the same good luck.

This entry was posted on Saturday, March 26th, 2016 at 6:23 pm and tagged with Bernie Sanders, Donald Trump, Hillary Clinton, ISIS, John Kasich, Ted cruz and posted in Uncategorized. You can follow any responses to this entry through the RSS 2.0 feed.
« Time for the UN and the rest of the world to step up and call murder by its real name
Why it’s Too Late to Stop Terror »