Explaining the fallacy of anti-Israel Liberalism 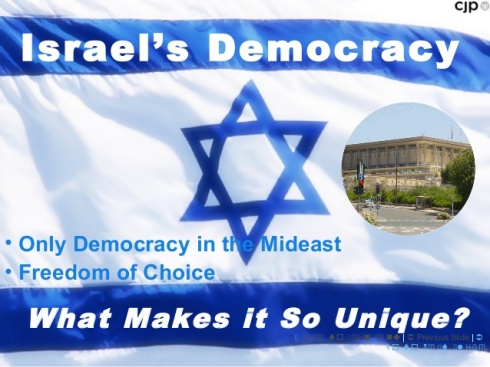 I finally have come to some understanding as to how the Palestinian cause has become part of the Liberal narrative.  As someone who considers himself a Social Liberal and Zionist, I’ve tried hard to figure out how Liberals have apparently become so opposed to Israel’s conduct and seem to think aligning themselves with the Palestinians makes them more caring and benevolent individuals.

The fact is that the Palestinians are an oppressed people.  Their leadership has received countless billions of dollars over the years to improve the lives of the people and rather than doing so they’ve created an angry, hopeless population that believes Israel is responsible for everything wrong in their world.  They’ve kept the money from the people, and whatever money they haven’t kept for themselves has largely been used on funding terrorist activity against the Jewish state.  The anger they’ve helped cultivate has created countless soldiers of hate, more than willing to kill and even die for their cause.

One of the popular arguments, particularly among Jews, is that criticizing Israel does not make you anti-Zionist, and certainly as a Jew not anti-Semitic. That statement by itself is of course true, but that doesn’t mean that every anti-Israel statement is true, and it certainly doesn’t mean there is something meritorious in attacking Israel’s policies.  Truth and honesty must always be a prerequisite to any opinion, and to sit in judgment over Israel’s actions today without looking at how we got here is not only dangerous ignorance, it’s succumbing to anti-Zionist propaganda.

I’ll come right out and say it.  Israel’s government makes mistakes. It sometimes takes incorrect actions that hurt more people than anyone would like to see hurt, however, two critical points need to be recognized if we are to judge Israel for its actions.  First of all, we need to look at how we got here.  History didn’t just begin. Israel’s actions against Palestinians didn’t come out of nowhere.  The wall wasn’t put up because of an irrational prejudice or bigoted doctrine.  Israel’s government doesn’t promote destruction or mass killings in any of its statements.  What it does on occasion, is react.  I once worked for someone who taught me that it is always better to respond than it is to react since reacting connotes taking action without considering the consequences.  There are times we can make a valid argument that Israel reacts rather than responds, but if we are to be fair we need to take an honest look at what Israel is reacting to.  Terrorists activities targeting the innocent on a regular basis takes its toll on a population.  It’s designed to.  Terrorists count on that.  For anyone to criticize Israel’s actions without recognizing decades, not years, but decades of terror is a prejudice in itself.

The second thing that needs to be considered is the severity of the response or reaction.  Considering Israel’s strength,  bulldozing the homes of terrorists that kill Israeli citizens on its streets is relatively light.  Bombing locations where active terrorists are hiding is a justified action. I’m as unhappy as anyone that Israel finds itself put in the situations that is it, but consider this.  When Israel takes out a terrorist, its enemies target civilians.  When terrorists attack Israeli civilians, Israel targets terrorists.  It’s a tragic cycle, but there is no moral equivalency here, and to try to create one where one doesn’t exist is either complete ignorance or even worse, blatant anti-Semitism.

Do I wish the situation was different? Of course I do.  Do I think Israel is perfect?  I do not.  However, taking sides against the Jewish people because in Israel they’ve gone from being the oppressed to being the strong, doesn’t make someone Liberal, it either makes someone the product of indoctrination or a disingenuous bigot.  When a person hears a lie often enough it starts to sound true.  Although caring for the oppressed is a valiant mission, there is nothing Liberal about siding with the party that wants to wipe out a people and claims it is in the name of protecting the oppressed, when all it is really about is the acquisition of wealth and power.  Promoting peace is the most just cause there is, but there is nothing Liberal about siding with those who don’t really want it, even if they claim to represent the oppressed.

Is it OK to criticize Israel? Of course it is. But if someone is honest and gives equal time to all those committing any questionable acts they would find themselves speaking about Israel’s activities against the Palestinians a lot less than they do today. When you no longer look at Israel’s behavior in an anti-Zionist vacuum you realize that there is nothing liberal about disregarding the incredible restraint, and yes even tolerance that Israel has shown over the years.  And seeing how tolerance is supposed to be the true definition of liberalism, maybe then those who call themselves Liberals would be on the right side.  And remember this.  As Conservatives are on the right side of the political spectrum, and Liberals do not think as Conservatives do, they need to remain cognizant of the fact that the opposite of right in this case is left, not wrong, and to be anti-Israel for its actions is not left, it’s wrong.

This entry was posted on Tuesday, January 12th, 2016 at 1:14 pm and tagged with Conservatives, Israel, liberalism, liberals, Palestinians and posted in Uncategorized. You can follow any responses to this entry through the RSS 2.0 feed.
« The Ten Commandments w/Explanation
Does it make a difference? »