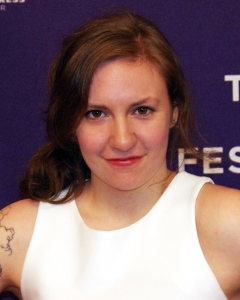 To be honest with you, I’ve never watched the show Girls.  My understanding is that it is a show which is somewhat controversial inasmuch as it pushes the envelope when it comes to what many consider acceptable behavior.  I really don’t care if it is or not. It’s a TV show which people have the choice of either watching or not.  So whatever role you play in its creation is of no importance to me. When however you transform your celebrity into expressions of anti-Semitism, I not only care, I get deeply embarrassed and infuriated by the fact that the words are actually coming from a woman who is born a Jew.

In your article in the New Yorker Magazine you start by asking the question, Do the following statements refer to a) my dog or b) my Jewish boyfriend?  Your next line should be; He is no longer willing to be associated with me due to mindless and offensive insult of the Jewish people.  If it is your dog that applies to I can understand it, but if it is your boyfriend than I ask myself, why would any decent person, particularly one who is Jewish wish to be that close to you?

You see Ms. Dunham, you’ve crossed the line.  Clearly you think you are funny, but neither I nor many others who think like me are laughing.  In trying to draw a comparison between your dog  and your Jewish boyfriend you are either showing tremendous insensitivity, mind-boggling stupidity, or immense hatred for my, excuse me, our people.  Although I have not watched the show, it is my understanding that it is meant to empower women. Apparently you are a feminist, an idealist, and a thinker.  Or so you claim.  It seems to me that what you might actually be more than any of these things is a hypocrite.

You can’t really claim ignorance.  I am sure you know this is a rough time for the Jewish people.  Anti-Semitism is on the rise, Israel is threatened, and somehow people think it’s OK to treat us anyway they like while talking about us in the most insulting fashion.  As you are a feminist I ask you this; is this how you want women to be treated? With total disregard for their feelings?  With an undignified comparison to a dog?  You claim to be fighting against that sort of thing yet here you are doing it yourself.  Would you show that same insensitivity and thoughtlessness to other women?  What you may be saying, be it consciously or not, is that being a woman is important to you, being a Jew is not.

We live in a global climate in which people who say they want to massacre Jews and annihilate Israel are being considered parties with which to negotiate openly.  It is a world in which a growing number of Muslim extremists believe that Jew are the descendants of pigs and dogs.  Your comments show that standing up for what is right just isn’t as important as you portray it to be, for if it was, you would use your public persona for all things positive, not just for a big paycheck.

Of course you will probably get away with this behavior without any serious consequences because us Jews are not only generally civil in our reactions, to put it in your terms, our bark is a lot worse than our bite.

This entry was posted on Thursday, March 26th, 2015 at 9:09 pm and tagged with anti-Semitism, Girls, HBO, Israel, Jews, Lena Dunham and posted in Uncategorized. You can follow any responses to this entry through the RSS 2.0 feed.
« Letter to the Editor of The Chicago Tribune
My Evolution to Radical »

One response to “Open Letter to Lena Dunham”