“I’m Confident”: Language of a Salesman 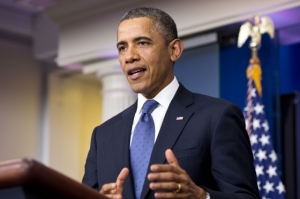 The most talked about statement at President Obama’s news conference earlier today was when addressing how the United States would deal with ISIL, he said, “we don’t have a strategy yet”.  Understandably that admission, if it’s the truth, is a disturbing one.  However, it is not what struck me most about his overall statement. What struck me more was his careful placement and use of the word “confident”.

Maybe it’s the salesman in me that made me notice it, but the word confident in some situations is clearly used to get someone off the hook if and when something goes wrong in the future.  Unless I heard wrong he said the following:

Then when stating in a way that would not instill fear in a field mouse let alone a brutal terrorist he said in regard to getting rid of the cancer that is ISIL, “but I’m confident that we can and we will working closely with our allies.” There’s that word confident again.  Doesn’t exactly reverberate with strength and conviction does it?  To be honest Mr. President, with what is at stake here, we need you to be sure, not merely confident.

The word “confident” when used in these contexts are designed to sell something.  If he was trying to sell the American people the belief that he is properly protecting us, I hate to say, I’m just not buying it.  The world needs more than a meek confidence right now from the President of the United States, it needs unwavering certainty and strength.  Without that I am confident we have some very difficult times lying ahead of us.

This entry was posted on Thursday, August 28th, 2014 at 8:53 pm and tagged with Commander-in-Chief, congress, Iraq, ISIL, President Obama, Syria, United States and posted in Uncategorized. You can follow any responses to this entry through the RSS 2.0 feed.
« Why I no longer argue with Stuart
For the Ignorant and Complicit history only Started on July 8, 2014 »