The Stark murder and my discomfort as a Jew 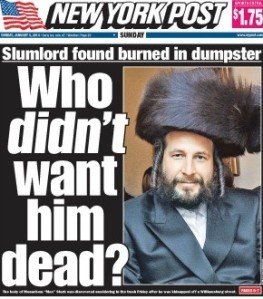 The story of Menachem Stark, recently murdered slumlord, found dead and burning in a dumpster in Great Neck, NY has been all over the news.  The story is well known and the reporting on the story, specifically by the New York Post has become quite controversial.  Did I mention that Menachem Stark is a Hassidic Jew?  Of course I didn’t.  Why? Because it makes me uncomfortable on many levels.  And here is why.

To begin with there is the issue of what is known in Judaism as the Chilul Hashem.  The term, loosely translated into “The desecration of God’s name”, represents behaviors by someone who is clearly Jewish as being a poor representation of Jewish behavior.  Every time I see the face of this man, a man I did not know, I become uncomfortable with the knowledge that much of what he is accused of has a strong chance of being true.  I know that there could have been circumstances when I stood next to him in prayer.  I don’t know that I have, but I have been in enough locations over my life not to know that I haven’t.  So on one level I am somewhere between heartbroken and angry that a man who represented himself as being a guardian of the Jewish faith may have been guilty of being a slumlord concerned only about his personal fortune.  I don’t know any of this to be true.  But remember, this is about my discomfort not my personal judgment.

Part of what makes me feel this uncomfortable is the same thing that makes me shudder every time I think of his fate.  Hassidic Jews to anyone who has been exposed to Orthodox Judaism on any significant level are not people seen as being larger than life.  Even those seen as great by all, the pious, learned, and charitable types are still accessible to the people around them.  The basis of Hassidic Judaism is piety as it was formed to allow Jewish people who were not skilled in learning to still achieve a high level within the community based on their decency and kindness.  So yes, Menachem Stark may have been guilty of every charge made against him, but the thought of him being kidnapped in the snow, beaten, suffocated, burned and put in a dumpster gives me the highest level of discomfort.  Let me be clear about one thing.  I would have seen it as being just as wrong if he was not Jewish, but again, this is about my personal discomfort not my personal judgment.

And lastly and most likely most significantly, my discomfort comes with the knowledge that there are those out there who hate the Jewish people even when we do things right.  This is just the story they look for to strengthen their resolve.  They will accentuate his Jewish image as being part of the motivating factor in his lack of business ethics, they will highlight those who worked with him and defend him as being more evidence of what a “dirty Jew” is capable of, and they subtly, if not obviously, bring attention to all the things that makes his appearance and lifestyle different.  All this will at the very least be justification in their eyes for finding ways to marginalize if not completely remove the Jews from any status in society and at the very worst, justify violent acts against any Jew for no particular reason.

I can’t control the images that a tabloid like the NY Post chooses to display.  I understand the anger at the Post because it does magnify who he was and what he very possibly did wrong, but at the end of the day I believe in free speech and their right to do so.  Just as I believe in anyone’s right to protest against their journalism be it by speech, protest, or by not buying the paper at all.

Regardless of how we respond to the reporting of the story I will still be very uncomfortable with the whole situation. And I hope that if there are people out there who are representing themselves as Jews, particularly pious Jews that they take a good look at their actions and understand the responsibility that comes along with it.  Not just to the outside world but to other Jews like myself who are most likely just as uncomfortable as I am.

This entry was posted on Tuesday, January 7th, 2014 at 7:31 pm and tagged with Chilul Hashem, Great Neck, Hassidic Judaism, Jewish, Menachem Stark, New York, NY Post, Orthodox Judaism and posted in Uncategorized. You can follow any responses to this entry through the RSS 2.0 feed.
« Accentuate The Negative
How Ariel Sharon’s life tells the truth about Israel »