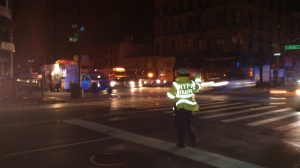 So today I decided to look for the story.  Naturally with all the events taking place there were stories to be found just by following my somewhat normal routine, but the most interesting information was definitely a result of putting myself in the right place around the right people.  Time in these situations is not as important, except for the fact that it would have to be nighttime.

What I suspect will happen as time goes on, is that for most people life will almost entirely go back to normal.  The people who we will still be hearing about in the months to come will be those from the most severely hit places like Staten Island, Long Beach, and of course the Jersey Shore.  In some ways today was a taste of that.  Of course the commute was slow and the stories were there, but the real seriousness of the storm didn’t hit me today till I got to my office and saw my coworker with a suitcase at her desk.  I did not catch the whole story, but it appeared as though she was not even sure where she was going.  She just knew she was not going home to Long Beach and at one point appeared to be overwhelmed with emotion as she said that she just wanted to sleep in her bed.  It makes me thank God a little more as I sit here writing this while sitting on mine.

I chatted on Facebook with a friend from Staten Island who told me that the situation there was so bad that they were not letting anyone in or out of the worst areas and that they were using an ice skating rink to bring in dead bodies.  All indications are that the death toll from that area has been severely downplayed.  I will get more into that later in this piece.

On the ride home I saw the news that the New York City Marathon had been cancelled.  This news pleased me for a few reasons.  Although I understood the reasons for initially not cancelling it, cancelling it now sent the message that the situation is being watched so closely and that officials are so aware of the needs that they are not afraid to change their minds.  Good leadership sometimes requires flexibility, and in these trying times good leadership is as critical as it has been in some time.  The other message it sends is to those who feel, myself not included, that Mayor Bloomberg is dictatorial, is that he is indeed not and is willing to listen to the opinions of others.  That too, in my opinion, will be a critical factor in the city’s recovery.

Hours earlier I had made a decision.  When my train would arrive at Penn Station, which was now packed with people waiting for the LIRR’s limited trains, instead of taking the subway uptown, I would walk downtown.  I had to see the dark Manhattan.  At first I walked down 7th Avenue.  Although the stretch until 14th Street was not without power, there was a dark feeling to it, almost as if the street lights were on a lower intensity.  It was hard for me to figure out what it was since I am normally not in this neighborhood at night anyway so I had no way of knowing if this was normal or not.  Around 19th Street I turned up to 8th Avenue because I wanted to see the building that had been partially destroyed, but either it had been repaired already or my memory failed me and it was not on 8th Avenue between 14th-18th Street.

I arrived at 14th Street to one of the oddest sights I have ever seen in New York City.  The northern side of 14th Street had power, the south side was dark.  It was so dark south of 14th street that the people walking further downtown were just disappearing into the darkness in a very eerie way.  The police were directing traffic with flares and whistles.  It almost felt like I had been transported in time.  I’m not sure when, but for some reason this did not feel like 2012.

I then decided to walk east.  For those of you who do not speak New York City geography, going east means going from a higher numbered Avenue to a lower one.  So walking from 8th Avenue to 7th Avenue is going east.  But east to west applies to Avenues only.  Walking from 34th  Street to 14th Street was walking south.   So that takes me back to my walk east, which was in almost total darkness and lead me to eventually stop at 6th Avenue.   This is where I had the most interesting and informative moments of my day.  I spoke with the Traffic Cop who was more than happy to open up to me about her experiences.  Clearly this was a lonely job and any company was welcome.  She told me how she had worked 22 hours straight in the height of the hurricane.  From Monday at noon till Tuesday at 10AM she was in a car at 23rd and Lexington Avenue.  She admitted how scared she was at the peak of the storm and even though she counted only 5 cars over her entire shift she knew she needed to be there and was very resolved to what her job was.  After telling me her job was normally to give out tickets I asked her how it felt to be the good guy for once.  Needless to say she liked it. At this point a police officer walked over to the corner.  They clearly knew each other and he was nice enough to share some information with me.  Much of it was very disturbing.

I asked him what area was the worst he had seen since the storm.  I expected him to say Staten Island or Rockaway or Breezy Point.  Instead his answer was Coney Island.  Yes the world famous Coney Island.  He told me that the damage was so extensive and caught everyone so by surprise that they were powerless against it.  The residents were angry and frustrated and looting was widespread.  The reports on the news of a few incidents of looting were clearly not accurate.  Coney Island was a mess and looting and anger in the streets was one of the main reasons.  He said Canarsie, Brooklyn had a similar problem.  Not to make light of the events in Canarsie and not out of any disrespect I was more shocked about Coney Island.  My question to him was this; how is it that the news had not covered the disastrous situation in the world famous Coney Island?  His answer was that the press was a lot more focused on the situation in Lower Manhattan because of its high profile status.  I asked him if there was a concern about those areas collapsing into anarchy.  He emphatically said no because there now exists a very large police presence.  This lead to me bringing up the recently cancelled Marathon, which he said would have been impossible with the need for police in so many different areas of the city.

He told me that parts of Lower Manhattan had been hit really bad and particularly made mention of the Bowling Green Subway Station which he basically described as being one of the many stations still completely under water and destroyed.  He said it would be a long time before that particular station would open.

I asked him about Staten Island.  He confirmed what most of us already know.  The situation there is horrendous.  In a 24 hour period he saw the death toll rise from 8 to 19.  But he also said that as angry and frustrated as the people appeared on TV in regard to the relief efforts, they were incredibly nice to the police.  But he said what we sadly know.  The people there desperately need help and the situation on the ground is devastating.  He said that the people who are thinking about helping should donate food before they donate money.  I asked him if there was somewhere for people to drop things off if they wanted to help.  He was uncertain but thought FEMA had something set up on the West Side.  I suspect within a day or so everyone in New York will know how to donate food and supplies.

He told me how they were working long shifts, I believe he said 18 hours, and then were allowed to go home for 4 hours for a rest before coming back out for the next shift.  And then finally he told me that a lot of the police on patrol at the city intersections were cadets who were not even fully trained police officers yet and were learning on the job in a way none ever had before.  I thanked him for his time as he left to inspect the subway station on the corner where we had stood talking, 14th Street and 6th Avenue.

A bus pulled up to the corner that was making a right on 6th Avenue and heading uptown.  Since I didn’t want to walk 40 blocks I said goodbye to my new friend Melissa the Traffic Cop and hopped on the bus.  Of course when I got back to my street I needed to show the cop proof that I lived on the street to get past the barricade.  This cop told me to stay to the left side of the street which with the wind blowing a little stronger this evening made me just a little more aware of the large piece of metal still hanging from the crane.  According to my neighbor tomorrow is the day they deal with the crane issue.  Until that time comes I’ll go nowhere without my Verizon and cable bill.  Someone suggested I show a Con Edison bill instead but I felt like I could do without the irony.

This entry was posted on Saturday, November 3rd, 2012 at 5:23 am and posted in Uncategorized. You can follow any responses to this entry through the RSS 2.0 feed.
« A Post Sandy Update:Long Island, Long Commute, and Long Gas Lines
A Post Sandy Update: Firsthand Accounts from Coney Island and Staten Island (With pictures) »