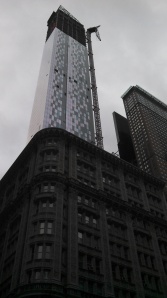 When you spend over an hour outside on a day like today, chances are you come back with some interesting tidbits.  From that perspective I am certainly not disappointed.  My possible imminent evacuation aside, most of what I heard was informative and fascinating.  I spoke with 2 firemen at Engine 23 on 58th Street.  One in particular shared with me some of his experiences from the past few days.  As he described it, their firehouse was the first on the ticket for the fires in Rockaway.  They arrived there but were unable to make it through due to the amounts of water making it impossible to get close enough to the fires.  At this point they were rerouted to Breezy Point.  They were not first on the scene, but they did end up remaining there till 6 in the morning.  Unable to get water to fight the fire from hydrants, they pulled water from the scene itself, the deep water they were working in, and flushed it through their machinery and hoses.  Jellyfish were getting caught in the hoses, and as the fireman I was speaking to described it, he kept expecting to see sharks swim at their feet.  As we’ve all heard already from so many sources, it was like nothing he had ever seen before.  He also told me how one of his fellow firemen brought his family up to the stationhouse earlier to shower since he had no power or water in his home downtown.  At this point a call came in and the chief said to the guy in a comforting tone, you take this one call and then you can go home.  I thanked them both for their time and walked to the avenue.

On the way there I saw a police van and thanked them for all that they do.  One of the cops thanked me and said, “a lot of people hate us”.  I gave him the response I always give whenever anyone complains about the police. “Try living a day without them”.  I asked if I would have any trouble getting back in and the cop behind the wheel smiled and said, “Not as long as we are here”.

At this point I walked to 58th and 8th.  I stood near the barrier where a man I recognized as CBS reporter John Miller was talking with a woman who I am guessing was a producer.  He was speaking about the different angles from which they photographed the hanging crane and how he was speaking with someone who said they got all angles.  At this point, not being shy at all, I showed him and his producer the video I took of the crane from 58th street, looking up at it close to the peak of the storm, and showed the crane swaying in the wind.  This encounter ended when an official asked them if they wanted to come past the barrier and get a better look.  I then walked down 8th Avenue and felt an eerie similarity to 9/11/2001 when I saw throngs of people walking uptown.  I felt an ironic comfort in the fact that there were many people walking in a hurry.  In New York that resembles normalcy.

I then decided to head back home but the barricade I came out of was now blocked up so I walked around till I found my way back into the cordoned off area.  I walked to 58th and 7th Avenue where a police officer told me that there was a likelihood that all the buildings in the areas cordoned off, my building included, would be forced to evacuate when they were ready to make the attempt to remove the hanging piece of the crane.  My conversation here ended when some tourists walked through the barrier and the policeman I was speaking with got mildly yelled at for not paying close enough attention.  Sorry officer.

A man who was a civilian was past the barricade and discussing strategies regarding the repair or removal of the crane with the police and the OEM (Office of Emergency Management) official at the location.  There was clearly some sort of disagreement on what strategy to use and the civilian seemed a little frustrated.  For some reason when speaking with one policeman about how to safely handle the dangling part of the crane he was looking towards me as though he was addressing me as well.  This was all I needed as an opening to put in my 2 cents.  I asked if it was possible to make it to the top, grab hold of the dangling metal and attempt to lower it slowly to the ground.  He seemed to get excited and said something along the lines of “finally someone who agrees with me”.  I’m not sure his credentials got stronger in my eyes because he agreed with me, a person who is the furthest thing from a crane expert, but who knows?  Maybe I got lucky.  I asked him who he was and he pointed to the thin black building next to the building with the crane and said he was the manager of that building.

I then asked the OEM Official what was going on and he answered me politely and in detail.  This is what he told me.   The area right below the crane is what is called a “Hard Zone”.  It means it is the most dangerous and no one can be on the street in that zone unless they are an official involved in the process of repair or protection.  All the areas in the radius that are cordoned off are known as “Soft Zones”.  Once the process of actually dealing with the hanging piece of the crane begins, all Soft Zones will become Hard Zones.  The decision they need to make is whether or not they evacuate everyone in the current Soft Zone or just inform the residents in the buildings, that includes yours truly, and hope they listen to the extent that if nothing else, they at least stay indoors.  Stay Tuned. I know I will.

This entry was posted on Wednesday, October 31st, 2012 at 8:13 pm and posted in Uncategorized. You can follow any responses to this entry through the RSS 2.0 feed.
« After the Storm: Support and Respect
A Post Sandy Update:Long Island, Long Commute, and Long Gas Lines »