Why is shock important? 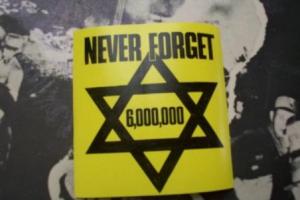 When writing a book about a time so significant and devastating to the Jewish people, one has a moral responsibility to acknowledge and honor those who perished from the brutality and suffered the horrors perpetuated by one of the most, if not the most evil governments in the history of civilization.  On the surface this seems to be an uncomplicated task, but when confronted with decisions on how to present the story, one must use their own judgment in choosing the means that best accomplish the goals set out in putting pen to paper.

Once on a visit to Williamsburg, Brooklyn, I made the comment that although I live my life almost entirely different than the Hasidic Jews that live there, I love going there because when I walk through the neighborhood I realize that with all the death and destruction Hitler orchestrated against the Jewish people, in the end he did not win.  Nazi Germany is long gone and the specific threat that it posed to the very existence of the Jewish people no longer exists, but the war of the anti-Semite against the Jewish people has not ended and still needs to be fought.  The attempt at intellectualizing Holocaust denial and the efforts by those who wish to accomplish this on a global scale threatens the Jewish people in a deceptive and methodic way.  Little by little there is a danger that more and more people will choose to believe that it did not happen and that 6 million Jewish lives were not killed by Hitler’s Germany.  In writing this book, and titling it “Jew Face”, even at the risk of offending some of my fellow Jews, I do so with the purpose of getting the attention of as many people as possible.  The alarming title will startle people, but if it gets many to read what happened and be aware, then it has served a positive purpose.

You can’t fight fire with smoke.  You must fight fire with fire.  And if giving this book a title that shocks people and makes them interested in its content I increase awareness of what truly took place, I have been successful in accomplishing the book’s most important task.  Honoring the victims and helping the world never forget what took place.

This entry was posted on Wednesday, March 28th, 2012 at 12:05 am and tagged with Brooklyn, Hitler, Holocaust denial, Jew Face, Jewish, Nazi Germany, Williamsburg and posted in Uncategorized. You can follow any responses to this entry through the RSS 2.0 feed.
« Congressional tribute to Rabbi Nardus Groen
Camp Erika »

One response to “Why is shock important?”